Dorico 3.5 offers new tools for trying out ideas during the composition process and for handling sample libraries through its expanded VST Expression Maps editor.… END_OF_DOCUMENT_TOKEN_TO_BE_REPLACED

ScoreCloud, described as ‘like Google Translate for music’, has been updated with polyphonic note transcription. … END_OF_DOCUMENT_TOKEN_TO_BE_REPLACED

PreSonus has announced that the latest update to Notion for iOS introduces an in-app purchase that adds finger/stylus handwriting recognition. Using a finger or stylus, you can write music in your own handwriting and see it automatically converted to digital notation. With an Apple Pencil on the iPad Pro, you can even write with pressure… END_OF_DOCUMENT_TOKEN_TO_BE_REPLACED 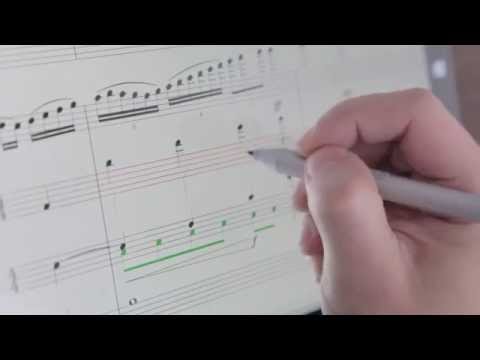 2014 Summer NAMM Show: PreSonus has announced that it is now shipping Notion 5, a major upgrade to its music notation software. Notion 5 includes a new video window, new effects from PreSonus Studio One, an enhanced chord library, a custom rules editor, and many notation and publishing improvements. Here’s the official intro video:

Avid has released Sibelius 7.5 – an update that focuses on improving scoring and composition workflows.

Music in itself carries a whole set of messages which are very, very rich and complex, and the words either serve to exclude certain ones or point up certain others.