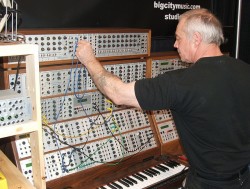 Modular analog synthesizers may seem like dinosaurs in this age of virtual instruments and computer-based music. In reality, modular synthesis has experienced a renaissance in the last few years. The Internet has made possible communities of interest to build around modular synthesizer manufacturers, and connected manufacturers with willing buyers. As a result, a new golden age of modular analog equipment is emerging, where the hands-on immediacy of big modular equipment is combined with reliability and repeatability of modern electronics.

Modular synthesizers provide musicians with a tremendous sense of physical control over the sound. With their walls of knobs, just about any aspect of a sound can be changed in real-time, without having to load any software, map any controllers or page through any menus. While they are largely based around analog control voltages, they can be used with MIDI to Control Voltage converters and be integrated into any system. A large modular system, like the Synthesizers.com system shown at right, offers tremendous capabilities for live performance, experimentation, and sound exploration.

What makes a synthesizer modular?

Modular systems are more affordable than they have ever been. While still not cheap, starter systems are available for a few hundred dollars, and big systems no longer require that you mortgage your house to buy one. At the low end, PAiA makes a modular system that can be had for around $500. At the high end, a basic Synthesis Technology MOTM system will run about $1,500 – $2,000, about the same price range as many good quality acoustic instruments.

Unlike most acoustic instruments, though, modular systems tend to grow, and many musicians find themselves addicted to the concrete control over sound that modulars provide. This leads many to expand their systems as funds allow, which can lead to monster-sized modular setups!. As systems grow, they capabilities expand, and as more people get involved in modular synthesis, the options available expand, too.

Most modular synthesizers are modeled in many respects after the classic systems of Robert Moog. The photo at right shows a vintage system from UCSC. Each module in these systems fits into a rack. The modules are connected inside the rack to a common power supply. Other than that, the modules function relatively independently. This means that patch chords must be used to connect the various modules together to make a “patch”.

Voltage Controlled Filters (VCF’s) control the frequencies that can be passed through them. The most common VCF’s filter out frequencies above a level set either with a control knob or a control voltage. This lets the synthesist control the brightness of a signal.

Moog and Buchla were two of the most influential early modular synth designers.

Modular Synthesizers In Use

Wendy Carlos made the most influential synthesizer recording to reach a large audience, Switched-On Bach, using a Moog modular synthesizer. Paul Beaver was another early user that was an active session musician, but he also pioneered the use of modular synthesis in the world of environmental new age music.

Keith Emerson was the most famous performer to use a modular synth in live performance. Emerson used it as a glorified lead synthesizer, as much for effect as for musical utility. His monster Moog would have certainly looked impressive on stage. He also was known to wield a Moog ribbon controller in a decidedly phallic manner.

Modular synthesizers fell out of popularity for nearly twenty years. In the 80’s, cheap digital synthesizers like the Yamaha DX7 offered an inexpensive way to get meat and potato sounds. These synthesizers did a good job of meeting the basic needs of performing keyboardists, and they did it for prices that blew away analog equipment. However, they could not duplicate the tactile control of sound that modular synthesizers can give you.

Some would say that we are experiencing a renaissance of modular synthesis. Analog equipment is hugely popular, with used equipment fetching tremendous prices. Modular synthesizers are the Cadillac or holy grail of the synth world.

Big modular analogs are wonderful to use, especially after using a digital synthesizer. While a equipment like a DX7 or a Kurzweil offers tremendous flexibility, power and polyphony at a reasonable price, they don’t have the immediacy, the flexibility, or the ease of use of modular equipment. Analog equipment also offers gradations in sounds that are still difficult to achieve with digital equipment. Controls on an analog synth don’t have 128, 256, or 1024 possible steps; they have as many steps as there are positions on the dial.

Modular synthesis has been recreated in software, such as Native Instruments Reaktor. Nevertheless, there are many synthesists that still enjoy the tactile feedback that modular synths afford, and the vibrant analog sound that these synths are known for.

In the last few years, monster Moog users Peter Namlook and Klaus Schulze have released a series of “Dark Side of the Moog” titles. Techno artists, such as William Orbit, have adopted modular systems as tools for generating new and interesting sounds. Ambient artists, such as Robert Rich, are using modular systems to create exotic electronic soundscapes in live performance, a feat that would be difficult to with other approaches to synthesis.

There are a surprising number of manufacturers of analog equipment that can be used in a modular fashion. Many, like Moog Music, make synthesizers and effects units that are patchable using standard control voltages. Other companies, like Synthesis Technology, are making true modular synthesizers, but updated for the twenty-first century. The best new modular equipment, like that in the MOTM line from Synthesis Technology, retains the best qualities of classic modular equipment, but updates it with modern electronics and improved designs, so modules have greater stability, reliability and flexibility.

The synth manufacturers listed below all are currently making analog equipment designed to be used in a modular manner. Most of the equipment uses the same electrical standards that Moog pioneered, so it can generally be mixed and matched. The physical characteristics of various systems vary widely. Some systems, like PAiA’s, are designed for compactness and low cost. Others, like the MOTM system, use larger form factors that are great for performance use, but increase the cost.

If you’re considering a modular system, it’s good to start small and leave room to grow. The modules that you will want will vary depending on what you want to do with the system. There are many modules, though, that are classic modular components that most users will want to include in their systems. These include, VCO’s, VCF’s, VCA’s, LFO’s and EG’s. A good starting point for sound synthesis use would be two VCO’s, a VCF, a VCA, an LFO, two EG’s, a power supply and a rack of some sort.

Leave room to grow your system, though! Today’s synthesists have more module designs available than ever before. This includes modern recreations of exotic classics, such as ring modulators, comb filters, sequencers, sample and holds, fixed filter banks, and noise generators.

Many innovative new designs are also available to tempt the poor synthesist. Wiard has a module known as the Waveform City that supports wavetable synthesis. MOTM has the juicy Triple Resonant Filter that combines three voltage controlled bandpass filters with two LFO’s. Oakley Sound Systems has a lovely voltage controlled phaser, known as the Equinoxe. Cyndustries offers a uber-sequencer, and many other interesting modules. Doepfer and Synthesizers.com have systems that are relatively inexpensive, yet have many unique modules. Encore Electronics makes a delicious 8-stage Envelope Generator/Sequencer/LFO, called the Universal Event Generator.