voXover is a voice-over automation utility and batch-recorder for multimedia projects that require large numbers of individual audio files to be recorded where a typical multi-track recorder is not feasible. Examples range from video game development and broadcast work to speaking dictionary and telephone voice-response production.

“voXover is an indispensable tool for multimedia developers who need to record large amounts of dialog efficiently and without error,” said Audiofile’s Matthew Foust.

voXover allows you to write or import a written script and rapidly automate the recording of that script. The script can be displayed on voXover’s teleprompter to the voice talent via your wired or wireless network. Sessions can range from completely automated to completely free-form. Takes are automatically created, named, and annotated as configured in the script. Takes may also be filtered, sorted, organized, rearranged, renamed, and exported at any time during the session, making voXover incredibly flexible. 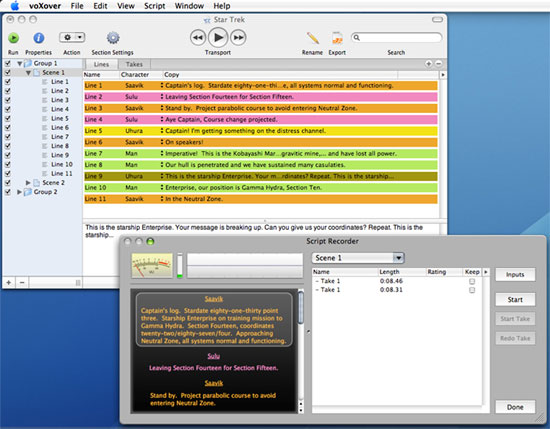