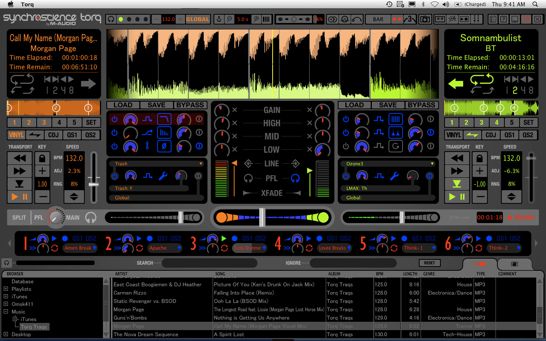 New features in Torq 1.5 software include:

Torq 1.5 DJ software is available immediately from the M-Audio webstore. The cost of upgrading from any previous version of Torq is USD$49.95. Customers who purchased and registered their Torq Conectiv or Xponent hardware after January 17th, 2008 are eligible for a no-charge upgrade to Torq 1.5 software.

Here are the details on the update:

The software’s new Tempo Anchors allow users to set the phase grid exactly on the beats of the song, even if the song changes tempo. Tempo Anchors make it possible for Torq to remove tempo variations from songs so you can easily blend old styles and new. For example, if you have an old ‘70s funk song that was recorded without a click, Tempo Anchors enable you to perfectly match that song with the steady beat of today’s computer-driven productions. You can also assign a track you’re spinning to serve as the Tempo Master for everything in Torq, so looped samples and other tempo-based features will automatically match the natural tempo changes in the song. These new features are enhanced by the addition of zplane élastique time-compression/expansion technology, a powerful new algorithm designed for stretching full music tracks without rhythmic anomalies.

Torq 1.5 software allows performers to incorporate outboard MIDI hardware into their audio production setups. Torq 1.5 software can send and receive MIDI Clock for total synchronization with drum machines, effects boxes and other computers. Multiple DJs can connect with each other and share the same tempo across systems, which improves collaboration between artists.

“The initial release of Torq changed the definition of DJ software by combining studio production tools with a robust DJ performance solution, blurring the line between DJs and producers,” said Adam Castillo, marketing director at M-Audio. “Torq 1.5 goes even further by delivering a host of innovative new features. With a compatible hardware interface like Conectiv or Xponent, Torq 1.5 DJ software becomes a powerful performance rig that enables DJs and producers to explore new creative directions.”