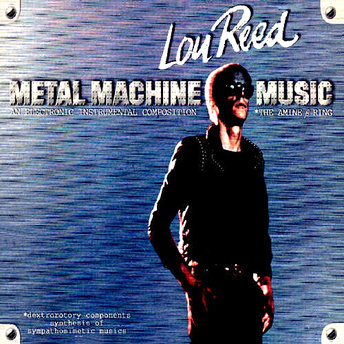 When Metal Machine Music was released in 1975, people did not know what to make of it. The album, influenced by the drone music of La Monte Young and John Cale,  consists entirely of guitar feedback played at different speeds.

Two guitars were tuned in unusual ways and played with different reverb levels. Reed then placed the guitars in front of their amplifiers, and the feedback from the very large amps would vibrate the strings — the guitars were, effectively, playing themselves. He recorded the work on a four-track tape recorder in his New York apartment, mixing the four tracks for stereo.

The small venue was probably only half full and its patrons consisted mostly of intellectual types and hard-core Reed fans. Long before the band came on, the sound system was playing an unnerving dissonant loop that seemed to keep getting louder. When they took the stage, Reed and his band, tenor saxophonist Ulrich Kreiger and Continuum (a touch sensitive MIDI keyboard) player Sarth Calhoun wasted little time for pleasantries before they dove into the apocalyptic rush, although Reed announced appreciatively beforehand, “I just want to tell you how happy I am to see you all here tonight.”

There were no “songs,” but instead the musicians churned out a continuous blaring fog that rose and decreased in its deafening intensity, marked by shrill electronic shrieks, long demented sax solos and Reed’s occasional yelling voice.

At the end of the show the controversy surrounding the album had manifested itself visibly: almost a quarter of the original audience had left. Many people who had stayed seemed to have done so as a matter of pride. Their faces looked pained and anguished. Some people had a look of pleasant calm, however. The band themselves had been grinning through their performance, having a good time as the music got louder and more unbearable.

Brian Eno wrote about Metal Machine Music in his 1995 diary, A Year With Swolen Appendices:

Discreet Music soft, calm, melodic and reassuringly repetitive, without a single sound other than tape hiss about 1500 Hz, whereas MMM is as abrasive and unmelodic as possible, with almost nothing below — and yet they occupy two ends of what was at the time a pretty new axis — music as immersion, as sonic experience in which you float.

The roots of Ambient.

It’s interesting that Eno sees Metal Machine Music as one end of the spectrum of ambient music.

For most, though – Metal Machine Music remains a challenge to endure: