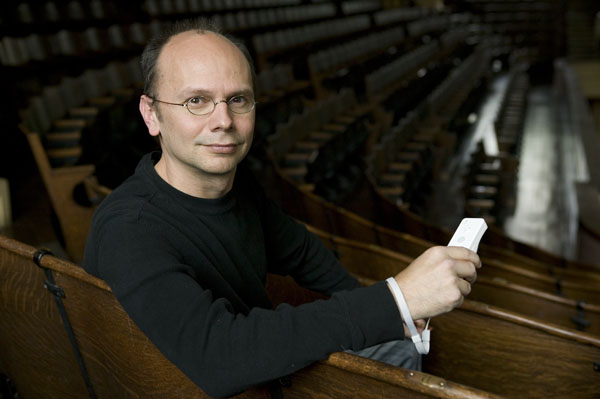 On Wednesday, May 20, 2009, Paul Henry Smith will conduct the first-ever live concert of a Beethoven Symphony using a digital orchestra, performed by Vienna Symphonic Library’s Vienna Instruments at Holy Name Church in Boston.

This will be the first concert in a series that will present all nine Beethoven symphonies.

The live digital orchestral music is realized by incorporating real-time performance control into a preliminary version that Smith prepares during hundreds of hours prior to the performance. For programming the Symphony, Smith relies on the Vienna Symphonic Library’s software instruments.

Accompanying viola and mezzo-soprano soloists, the Fauxharmonic Orchestra will make the most of its technology using wireless Nintendo Wii video-game controllers to change tempo, loudness, balance, timbre, and brightness – the elements a musician typically controls during a live performance. At Holy Name Church, the Fauxharmonic Orchestra’s sound will emerge from an array of Bang & Olufsen BeoLab 5 speakers.

Traditional instrumentalists have worried for years that computers and synths could one day put them out of business. Is that time here?

Maybe so, according to Smith.

“With current financial pressures, orchestras are cutting the performance of new music,” notes Paul Henry Smith. “By contrast, it costs far less for the Fauxharmonic Orchestra to prepare a new work for full orchestra and to perform it many times and in many places.”

Here’s an video that features Smith conducting the Fauxharmonic Orchestra:

While the Fauxharmonic Orchestra still can’t replicate the sound of a traditional orchestra, it’s undeniably musical.

“This technology is best understood as expanding the rainbow of expression,” adds Smith, “rather than undermining the art of orchestral music.”

What do you think of the idea of a Fauxharmonic Orchestra? If you can make it to the concert, let us know how it goes!