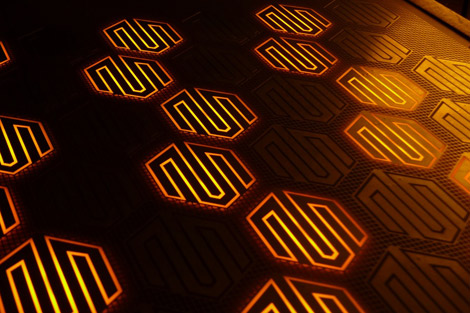 The Snyderphonics Manta is a new illuminated touch-sensitive interface for controlling music or video that combines alien sexiness with open-ended flexibility.

Each sensor in the Manta’s hexagonal array can tell exactly how much surface area your finger is covering, and this data can be routed to any audio or video parameter you choose.

According to 2secondfuse’s Vlad Spears:

The build quality is exceptional. The Manta is in the same league as Monome: hand created, all parts sourced and made in the United States, ROHS compliant, solid like a century tree.

400mA of power is drawn over USB, which provides both juice and i/o. A svelte 0.873cm (11/32″) thickness and feather weight means it’s easy to take everywhere you will take your laptop. It even comes with a swanky neoprene case.

If you’ve used the Manta, leave a comment with your thoughts.

The Snyderphonics Manta retails for $675. More details below. 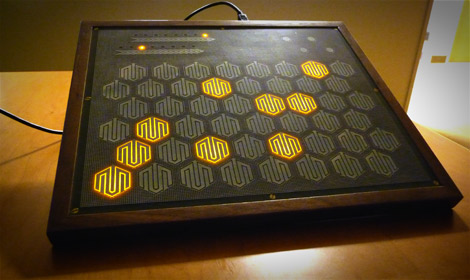 The Manta also outputs centroid data to turn the Manta into a large X-Y multitouch surface, for applications that don’t require discrimination between discrete sensors. For instance, you could have the Y axis be pitch, the X axis be timbre, and the size of the point of contact (determined by whether you have your finger or your whole hand on the surface) be the volume of the note, and have a very hands-on performance synthesizer.

The Manta also features LED backlighting on each sensor, and all of these LEDs are controllable from the host computer. In addition to giving additional feedback when a sensor is pressed (the default setting), this allows you use the sensors as displays for information the computer is using, like the current stage of a step sequencer. All 48 hexagonal sensors and the four circular function butters have LED backlighting, and each of the two touch sliders has an 8-LED indicator strip. All of these 68 LEDs are controllable from the computer.

The Manta is easy to use as an input for software like Max/MSP or Supercollider, and a free program is provided with the Manta that allows any sensor to be routed to any MIDInote or continuous controller for interfacing with standard software like Abelton Live, Kontakt, Reason, Logic, or Digital Performer.

2 thoughts on “With Gear This Sexy, Who Needs Advertising?”