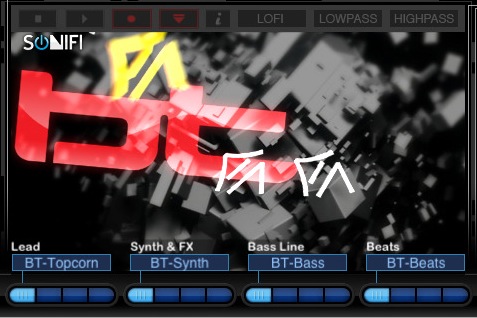 Here’s a video demo of Sonifi:

If you’ve used Sonik Architects’ Sonifi, leave a comment with your thoughts!

More info, and some rip-roaring press release hyperbole, below.

Sonifi is the world’s first true audio and visual remix application and protocol.

Created by BT, this application showcases futuristic new music and remixes of The Rose of Jericho from his forthcoming 2009 artist album. Sonifi is a powerful, portable, real-time remix engine.

For iPhone and iPod touch 3.0 users, a revolutionary new multi-player feature has been added.

Jam Link gives 3.0 users the ability to link with a friend (via Bluetooth) and remix live….TOGETHER. The mixmaster selects control over “Beats and Bass” or “Melody and Harmony”. Once JamLinked you and your buddy can remix, select tracks and Stutter Edit live. This is a first for any application, on any device.

In Sonifi, four channels of four unique tracks allow extreme flexibility and remix possibilities. The (4×4 matrix of) tracks can be mixed, muted or soloed and contain four completely unique elements and arrangements per-channel. There are four tracks of ripping beats to choose from, four tracks of fat bass lines, four tracks of glitchy synths and FX, and four tracks of cutting edge melodies. Everything in Sonifi happens in-time and on-beat; so making a mix is both fun and effortless.

There are mesmerizing visual elements that respond elegantly to user touch as well as the frequency and amplitude information of your remix. You are not just remixing, you’re visualizing what you are creating. Finally, Sonifi contains BT’s patented Stutter Edit technology and is the first application to showcase to its abilities.

Instead of using a mouse, USB device, or other input peripheral (like you would with a computer), your phone becomes an instrument!! Simply shake the phone in one of six vectorial directions (left, right, forward, backward, up, or down) and at the next 1/8th note the Stutter Edit plugin will perform a micro-note or fill pattern repeat, some with release crashes and hits.

Basically, you shake your phone and sound like a genius. (Sorry – this is straight from the press release guys!)

7 thoughts on “BT’s Sonifi For The iPhone”