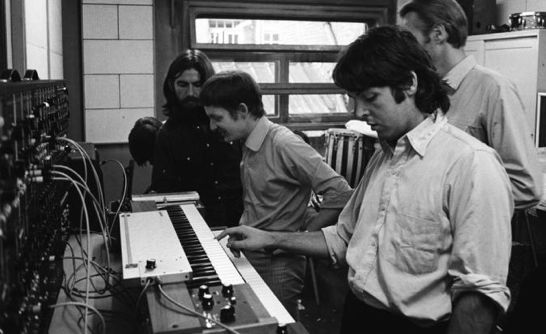 The site is all that – as much a reflection of how we view our own history as it is a history of the band.

The photo above, of The Beatles meeting the Moog synthesizer, is just one of many gems in their photo archive. The Moog made appearances on Abbey Road’s Maxwell’s Silver Hammer, Here Comes The Sun, & Because.

Mike Vickers (formerly of Manfred Mann) was employed to program to Moog during the Abbey Road recording sessions.

Other treats at the site include video from Magical Mystery Tour and other seldom seen footage, a historical timeline and an interactive discography.

The site isn’t obsessively deep, but expect to loose track of time if you visit.

The Beatles: Rock Band lets you pick up the guitar, bass, mic or drums (but not the Moog) and experience The Beatles’ extraordinary catalogue of music through gameplay.

From the early touring days in 1963 Liverpool to the immortal, final performance on Apple’s rooftop, fans can follow in The Fab Four’s footsteps as they traverse the globe during the height of Beatlemania, unlocking real photos and videos of The Beatles – some never before seen by the public. The Beatles: Rock Band introduces three-part vocal harmonies to gameplay and features 45 songs on-disc.

Three albums from The Beatles’ epic catalogue will be made available for purchase and download including Abbey Road (1969), Sgt. Pepper’s Lonely Hearts Club Band (1967) and Rubber Soul (1965). The Beatles: Rock Band will be available for Xbox 360 video game and entertainment system from Microsoft, PLAYSTATION 3 computer entertainment system and Wii console from Nintendo.

The Beatles’ entire original recorded catalogue has also been digitally re-mastered for the first time by a dedicated team of engineers at EMI’s Abbey Road Studios over a four-year period. The new CD releases include 14 re-mastered stereo titles available individually or collected in a box set, as well as 11 mono titles released in a limited edition boxed set.

All of the re-mastered stereo CDs are packaged with replicated original UK album art, including expanded booklets containing original and newly written liner notes and rare photos. For a limited period, 13 of the stereo CDs are embedded with a unique mini-documentary about the album.

3 thoughts on “The Beatles Play The Moog Synthesizer”