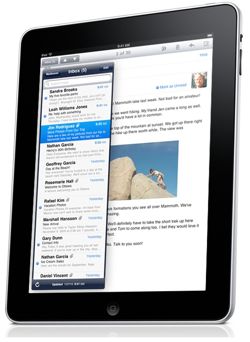 The Apple iPad is coming, at least in the US, April 3rd.

And it’s going to be hugely for music making – even if it strikes some people as “just a big iPod touch”.

One reason why the iPad is going to be important for musicians is that it will make a relatively inexpensive multi-touch control surface for music apps.

This is possible now, with apps like TouchOSC on the iPhone, but will really take off with the much larger iPad.

iPhone apps are limited by the device’s 3.5″ screen. The iPad’s 9.7″ screen not only offers a much higher screen resolution, but offers a lower pixel density (132 pixels/inch vs 163 pixels/inch), which should make adjusting controls less fiddly.

Here are five video demos that demonstrate some of the things you can do with an iPhone + TouchOSC right now. Give ’em a look and let me know if you’re ready to try these things out on an iPad!

The next video demonstrates how autoflavour uses an iPod touch with his Novation 25SL Compact MIDI controller to add multi-touch control of Ableton Live and an Access Virus Snow:

Want to go further out?

How about tactile sound design with your iPhone and Native Instruments Reaktor?

You can use an iPhone + TouchOSC to control video as well as audio apps, as this VDMX video demonstrates:

While you’re at it, why not try touchscreen DJing?