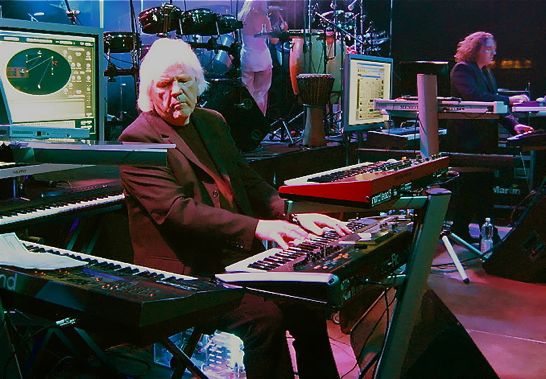 Tangerine Dream has reissued some of its classic Berlin School releases, Phaedra and Rubicon, on vinyl. They’re also back on the road, touring music from the bands’ 40+ year career.

Tangerine Dream founder Edgar Froese is has been performing as Tangerine Dream since 1967 – but he still has surprising things to say about the group and electronic music.

Such music emphasizes the intellect and is normally produced as a pure studio event. Working with synthesizers is a completely different approach to electrified music.

We’re open to all kinds of modern music developments and wouldn’t be interested in the locked up situation you’re into while working in a musical ivory tower. Of course, I love the guitar a lot, Motown stuff as well as modern progressive rock music. Finally it’s all a crossover within all musical landscapes and if you’ve never stopped learning from others, you have always creative inputs for your own work.

Froese also gives kudos to Vangelis and Jean Michel Jarre for their approaches to synth music:

If there is a true possibility of creating modern synthesized music without any mental barriers, I would consider myself as one of the strongest followers of such movement. It doesn’t matter if you call it Pan-European or Anglo-American or Contemporary Asian artistic development – it is always world music if you’re willing to follow not just the ethnic term.

As far as Vangelis and Jarre are concerned, I’m of course familiar with what they’ve done during their career. For their serious approach towards an individual musical expression, I respect them a lot.

See the full interview at The Quietus.

All music turns out to be ethnic music.