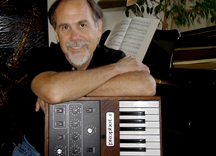 The TEC Foundation for Excellence In Audio has announced its 2010 additions to the Pro Audio Hall Of Fame – and Dave Smith’s Sequential Circuits Prophet 5 is now a hall of famer.

Each year, inductees are selected by a committee of more than 50 industry leaders, engineers, producers, designers, educators, journalists and historians, with the only “rule” being that any selection must be at least 10 years old.

Here’s the text of the official announcement:

Once in a while a product comes out that puts it all together—combining the latest technology, while breaking new ground and at the same time, filling a definite void in the market. And as the first programmable polyphonic music synthesizer, the Sequential Circuits Prophet-5 was exactly that. An analog synthesizer with the ability to play five notes simultaneously (enough for a chord) and having the memory capability to store a whopping 40 preset programs (later expanded to 120) might not create headlines today, but the Prophet-5 was a sensation in its time, and is still considered a classic.

The path to success wasn’t easy. Sequential Circuits founder/chief designer Dave Smith was excited about the prospect of combining the sound generation capabilities of the new ICs from Solid State Music (SSM) that reduced the major functions of analog filters and synthesis (VCO, VCA, VCF) into single chipsets, reducing the number of necessary components in an synthesizer circuit from hundreds to a few handfuls. At the same time, new microprocessors had just come to market (such as the 8-bit Zilog Z80), which while primitive by today’s standards could definitely handle tasks such as storing/recalling synth patches. Once the ingredients were in place, Smith worked with John Bowen (now of John Bowen Synth Design) and with some consulting help from E-mu founder Dave Rossum, the Prophet-5 project was underway, and was completed in just six months—an amazing accomplishment.

On its debut at the Winter NAMM show in January 1978, the Prophet-5 was nothing less than a hit. The SSM chips (later replaced with Curtis ICs), combined with Smith’s autotuning circuit kept the Prophet-5 in tune—a problem that plagued many early analog synths. Of course, its ease of operation, great factory patches of thick bass and lead sounds, and lush analog string pads made the Prophet-5 quite desirable—even at an original retail of $3,500 (later $4,500). Soon every top keyboardist either owned one—or wanted one—and the Prophet-5 sounds became a common fixture over radios everywhere, from punk bands to Michael McDonald’s signature sound on hits like the Doobie Brothers’ “What a Fool Believes.”

Other new Hall of Famers include Dr. Harold Hildebrand’s Antares Auto-Tune (created in 1997).