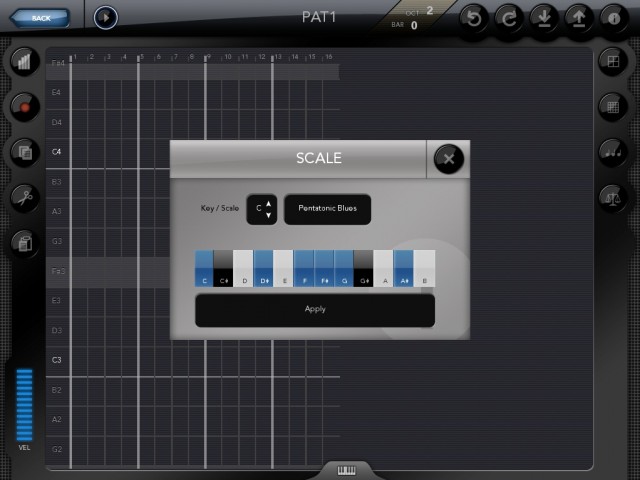 Developer White Noise Audio Software has announced an update to Genome MIDI Sequencer for the iPad.

One of the biggest improvements is the new scrolling gesture for the Pattern editor. The pattern editor has been rewritten to handle smooth scrolling and zooming using the two-finger gesture. Fans of the old navigation still have the option of of using the ‘View snapping’ option which keeps the view aligned to a bar, octave, and one of the set zoom levels. Otherwise, you can smoothly scroll and zoom as you please.

The other major improvement that went into the Pattern Editor is support for Scales. You can now pick from one of the many pre-defined scales (or make your own) which will limit the visible notes to just notes in the scale. This will make entering notes much more easy and fun. It’s also nice if you have a drum machine that only responds to certain notes. When picking a new scale, you’ll have the option to rescale your existing notes to the new scale.

We’ve also added draggable buttons to adjust the length of whatever notes you have selected, and also a quick delete button to delete the selected notes. This is a little more intuitive than having to click ‘cut’, and the length adjuster makes it easier to fix mistakes without having to start over. Additional  toolbar elements are planned.

Finally, we’ve also added a quick way to toggle off snapping to the grid. Users could previously set the grid resolution high if they wanted to do ‘off grid’ stuff, but this button makes it much easier to accomplish.

There will also be a host of small graphical improvements to the Pattern Editor. Among them: CC dots are now color coded to make it easier to distinguish them and fonts are also bigger for the Note names.

It looks like White Noise has incorporated the feedback of Synthtopia readers into their development roadmap. That’s great to see – and they also note that they’ve got ‘much more planned’.

Genome is ‘on the way’ but is not showing up in the App Store yet.

6 thoughts on “Coming Soon To Genome MIDI Sequencer For iPad”