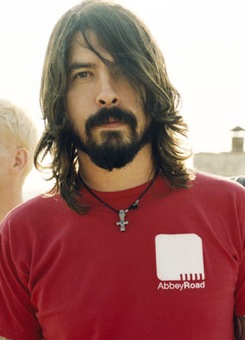 Rock god Dave Grohl (Nirvana, Foo Fighters) got a lot of nods from the audience with his heartfelt acceptance speech at the Grammy Awards this year. In the speech, Grohl said:

“To me this award means a lot because it shows that the human element of music is what’s important. Singing into a microphone and learning to play an instrument and learning to do your craft, that’s the most important thing for people to do.

Nice sentiment – but the way he said it also managed to piss off everybody who makes music with computers. People like Deadmau5, who remixed the Foo Fighters last year, and Skrillex, who won three Grammy Awards this year.

Grohl realized this and has released an official statement that backpedals a bit on his Grammy speech and offers an olive branch out to the electronic musicians of the world…..

Here’s what Grohl has to add:

I love music. I love ALL kinds of music. From Kyuss to Kraftwerk, Pinetop Perkins to Prodigy, Dead Kennedys to Deadmau5…..I love music. Electronic or acoustic, it doesn’t matter to me. The simple act of creating music is a beautiful gift that ALL human beings are blessed with. And the diversity of one musician’s personality to the next is what makes music so exciting and…..human.

That’s exactly what I was referring to. The “human element”. That thing that happens when a song speeds up slightly, or a vocal goes a little sharp. That thing that makes people sound like PEOPLE. Somewhere along the line those things became “bad” things, and with the great advances in digital recording technology over the years they became easily “fixed”. The end result? I my humble opinion…..a lot of music that sounds perfect, but lacks personality. The one thing that makes music so exciting in the first place.

I don’t know how to do what Skrillex does (though I fucking love it) but I do know that the reason he is so loved is because he sounds like Skrillex, and that’s badass. We have a different process and a different set of tools, but the “craft” is equally as important, I’m sure. I mean…..if it were that easy, anyone could do it, right? (See what I did there?)

So, don’t give me two Crown Royals and then ask me to make a speech at your wedding, because I might just bust into the advantages of recording to 2 inch tape.

I don’t know about you, but I think I like Grohl better after a couple of Crown Royals, raising hell about the importance of the human element in music.

Leave a comment and let me know what you think!