The strangest music technology news in a long time has to be the digital reincarnation of Tupac.

The performance that generated the most buzz at this year’s Coachella wasn’t from a rising star, but from a virtual version Tupac Shakur, who’s been dead 16 years.

Thanks to Dr. Dre and visual effects company AV Concepts, the ‘Tupac Hologram’ was able to perform with Snoop Dog at the festival, as shown in the video below.

Here’s what AV Concepts had to say about the Tupac Hologram:

After months of design, engineering, and creative consultation,  AV Concepts delivered a perceived 3-dimensional, life-sized holographic projection of Tupac to perform on stage with Dr. Dre and Snoop Dogg, during the renowned desert festival.

Utilizing the Musion Eyeliner system, the 30′ x 13′ screen was customized by AV Concepts to descend onto the stage in mere seconds between sets of the performance to bring the infamous, deceased singer back to life. 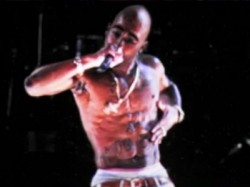 Looking at this critically, there are a lot of reasons to hate the Tupac Hologram, starting with the appropriation of Tupac’s image, taking a detour by what this says about the sorry state of hip hop and moving on to the fact that it’s not really a hologram.

There are already plans for a stadium tour starring the Tupac Hologram, so you know that a Biggie Hologram can’t be far off. And pretty soon, it’s the East Coast/West Coast Rap War all over again, but with fake holograms.

But The Technology Is Still Kind Of Cool…

While reincarnating Tupac seems crass and unnecessary – the technology is still fascinating and could be really interesting in the hands of creative remixers.

Musicians are already working with vocal synthesizers, virtual musicians and music robots. And concertgoers are already going to shows that combine live musicians with virtual performers. The Tupac Hologram suggests that remixers could soon be remixing performances, rather than just audio.

What do you think of the Tupac Hologram? Is it just crass commercialism, or is there something more interesting there to be explored?

22 thoughts on “Is The Tupac Hologram The Future Of Remixing?”