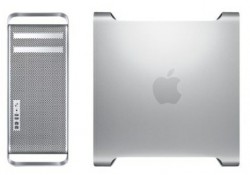 Andy Hertzfeld, a member of the original Apple Macintosh development team, has some choice words for his former employer about the Mac Pro update that was introduced yesterday:

The next generation MacBook Pro announced today at WWDC looks fantastic. I ordered one immediately and can’t wait to start using it.

Unfortunately, the euphoria was negated by my deep disappointment with the meagre, lame update that was silently bequeathed to the Mac Pro today.

The Mac Pro is Apple’s top of the line, expandable Macintosh, aimed at users who need lots of computing power and disk storage, like programmers or other professionals. I have an 8-core Mac Pro with 16 GB of RAM in my home office that was an amazing machine when I acquired it in 2008, but it’s not so hot by today’s standards. I’ve been looking to get a new one for a while now, but Apple hadn’t updated the hardware for two years, so I was looking forward to finally seeing a new one announced today, with essential features like Thunderbolt and USB 3.0.

When they didn’t mention the Mac Pro during the keynote presentation, I got worried but figured they’d update it anyway, it just wasn’t worthy of mention from the high pulpit of the consumer-oriented keynote. And sure enough, when I visited store.apple.com, there was a little “new” icon above the Mac Pro. But I was in for a shock when I clicked on the link to check it out.

The specs for the “new” Mac Pro had hardly changed, except for a tiny, inconsequential processor clock bump. Still no Thunderbolt, still no USB 3.0, no SATA III or RAM speed improvements – it seems like it’s stuck in time in 2010. The only thing that’s still high-end about it is the bloated price.

Apple had interesting news about both the iOS and OS X operating systems, yesterday. And the updates for its MacBook Air and Pro lines should maintain and even grow their popularity.

The relatively minor updates to the $2,500 Mac Pro, and the lack of fanfare given to them, suggest that the line is becoming too small of a niche to warrant much attention from the company.

What do you think? Are giant towers becoming dinosaurs, even for power users like musicians, graphic artists and programmers?

Update: Apple CEO Tim Cook has responded to questions on this and says that an updated Mac Pro design is in the works:

Thanks for your email. Our Pro customers like you are really important to us. Although we didn’t have a chance to talk about a new Mac Pro at today’s event, don’t worry as we’re working on something really great for later next year. We also updated the current model today.

We also announced a MacBook Pro with a Retina Display that is a great solution for many pros.