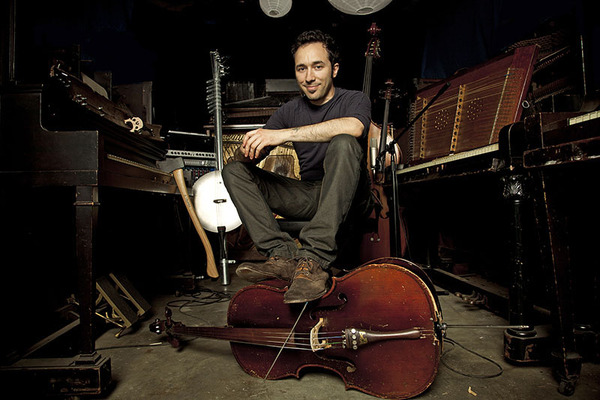 Diego Stocco is a name familiar to many Synthtopia readers. Stocco is known for his sound design work with Spectrasonics; his inspirational sound design videos; his unique instrument designs; and for torching pianos.

His most recent project is the soundtrack for the horror film, Chernobyl Diaries. The soundtrack draws on all his background, from sound design to custom instruments. You can hear some cues from the soundtrack at Stocco’s portfolio page.

Synthtopia’s James Lewin talked to Stocco about his work on the soundtrack, his journey from sound design to soundtrack work and why he’s hellbent on torching pianos. 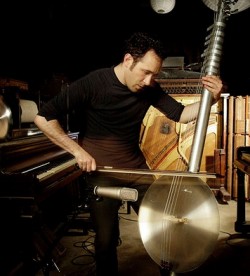 Synthtopia: Congratulations on scoring Chernobyl Diaries, Diego. How did the opportunity to score this film come about?

Diego Stocco: Thank you so much James! The opportunity came after the director Brad Parker had a chance to see some of my videos online, he liked my approach with sounds of my custom built instruments and thought it could work well for his film.

Synthtopia: In a broader sense, how did you evolve your career from being a young guy with a creative ear for sound design to doing the soundtrack for a motion picture?

Diego Stocco: I always had a passion for film music, which I tried to channel also in the sound design work I’ve been doing with Spectrasonics.

To me, the process of creating sounds is tightly connected to the process of making music, I see these two phases being one the continuation of the other, and I actually enjoy very much creating sounds from scratch when it comes to my musical works. I also think that doing a lot of sound design work gave me the opportunity to figure out what approach to recording techniques, synths and instrument I like the best.

Synthtopia: Do you think there are key things you’ve done, in terms of your work or how you’ve networked, that have helped you to jump from success to success?

Diego Stocco: Posting videos online helped a lot as far as getting my work out. As a musician, it’s just the easiest way to show what you can do.

These are days when we can make our work public without having to wait for it to be incorporated into anything else, we can make our own videos, produce the music we like and publish it in front of a potential worldwide audience, and definitely websites like Synthopia play an important role in bringing our works to a larger audience. What I’ve seen happening in terms of involvement in films and video games at the beginning was a surprise to me, I wasn’t planning to reach any specific goal with my videos, I just wanted to try new things.

About The Chernobyl Diaries Soundtrack

Synthtopia: Can you tell me a little about the film and your soundtrack?

Diego Stocco: The film takes place in the city of Pripyat, which was abandoned due to a radiation fallout after the explosion of reactor number 4 at Chernobyl. The atmosphere there is heavy, almost unrea – people had to leave behind all their possessions because they were contaminated.

After many years some tourist guides started offering visits to this place as an extreme tourism location. There’s this group of guys that on their way to Moscow decide to stop by and see the place, and the basic premise is that the place is completely abandoned and safe, but as they later found out that’s not the case.

The soundtracks evolves from abstract cues that are very sound designed oriented into very aggressive ones that I played with my custom built instruments. It also contains melodic moments that I played with custom techniques on guitar and bass through stacks of plugins. Overall, the idea was to make the music feels like it was emanated from the place.

Synthtopia: What was your process for scoring the film? How did you decide how to approach the score and what would work best in the film?

Diego Stocco: After the spotting session, I had a general idea of what kind of instruments and timbres I wanted to use and I knew which things Brad and the producers Oren Peli and Brian Witten were looking for, I started with some cues to figure out the direction and then kept moving on with one cue at the time.

I started by creating a palette of timbres on synths, plugins and my instruments, then played them live while the scene was running, and when I felt it was working, I recorded some takes, I didn’t use any MIDI sequencing, it’s all played in real time.

Synthtopia: You’re known for your unique approach to sound, whether it’s with found sound, sound design or custom instruments. Can you share some examples of the techniques you used for Chernobyl Diaries? 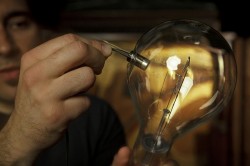 Diego Stocco: One of things that I wanted to create was a sense of instability, so I thought that I could do that by using custom tunings and micro tuning. Some of the lines drift up and down few cents instead of semitones, so you feel like they’re moving but they don’t create a precise sense of melody.

One the techniques I used to create these fluctuations was to slide a lavalier microphone in and out of a light bulb. The light bulb works as a resonant chamber, but when you keep the microphone half way through it doesn’t create a defined feedback, the note keeps going up and down, like when you’re hearing binaural beats. I used different sizes of lightbulbs for different notes.

Then, I used a broken cello that couldn’t be tuned to the regular tuning, because the bottom is almost collapsed, so the strings are really wobbly and the harmonics different from a perfectly functioning cello. I changed tuning on the electric bass and guitar for each cue, picking notes that together were sounding interesting, and by doing that, the intervals on the frets changed too. Also, I used different gauges for each string, which worked really well especially when I was bowing them. 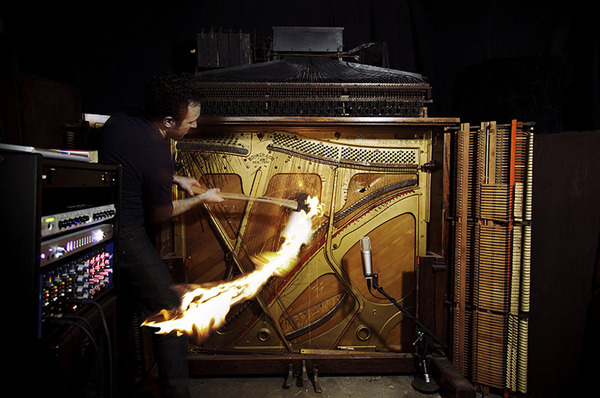 Synthtopia: On your portfolio page, you mentioned that one the techniques you used for the film was ‘axing a piano’. You really seem to have it in for pianos. But why axe a piano for this soundtrack?

Diego Stocco: I love pianos because they can be seen also as huge resonant boards, so any audio event that happens in contact with the soundboard becomes richer.

There’s an abundance of old pianos that can’t stay in tune anymore, so instead of leaving them in warehouses being covered with dust, I use them in alternative ways. Specifically I was axing the piano because there are several scene where I needed to start the cue at the maximum level right away, and by chopping the strings with an axe I was able to get an accent and also a rattling sound.

On the low end strings, when using an axe the sound becomes really intense, with lots of harmonics that you couldn’t get by playing that same note with a piano hammer. You’ll be able to spot these accents very easily in the film.

Synthtopia: You know you’ve got many fans among Synthtopia readers and some may see the film because of your name on the soundtrack. Are there things that you are especially excited about that you think soundtrack fans should listen for?

Diego Stocco: Again, thank you for the attention to my works over these years and thank to your readers. I’d invite them to enjoy the film as a whole, I love the fact that the director and producers decided to create a very clear mix, there are moments when the music really stands out, others where the music serves the dialogues and leaves space to sound effects and foley.

Synthtopia: Is there a soundtrack album that readers can look for, or is your music available in digital form?

Diego Stocco: Right now I posted some short extracts on my Behance profile, but the soundtrack should be out July 8th as a digital release on all platforms.

Synthtopia: Can you share what you’re working on next?

Diego Stocco: I like to keep a little bit of mystery, but I’ll definitely keep you posted :  )

Synthtopia: Finally, if readers want to learn more about you and your music, where can they go?

Diego Stocco: The best places right now are my Behance profile and Soundcloud page, at the moment they’re better organized than my website (which I’ll have to rebuild because it’s all Flash).

Synthtopia: Thanks so much for your time Diego!

8 thoughts on “Diego Stocco – From Sound Design To Soundtracks”