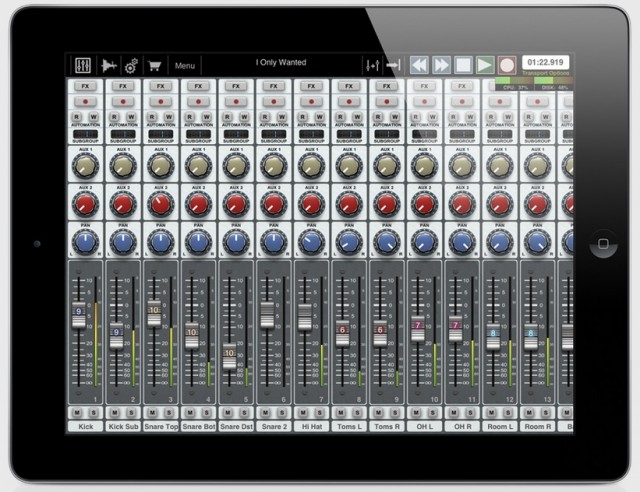 Auria has generated a lot of buzz since its introduction at the 2012 NAMM Show. Auria is a 48-track digital recording system, designed from the ground up for the iPad. Offering advanced features like AAF import/export, and third-party plugin support from names like PSPaudioware, Overloud, Fab Filter and Drumagog, Auria challenges people’s notions of what you can do with an iPad.

We knew a lot of readers would be interested in Auria, so we checked with developer Rim Buntinas, founder of WaveMachine Labs, to find out more and to get some of our questions answered: 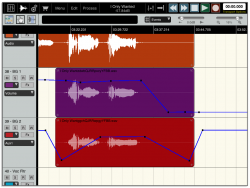 Synthtopia: How does WaveMachine Labs ‘position’ Auria. What’s the customer need that Auria is targeting?

Rim Buntinas: We’ve designed Auria to be both easy to use and powerful at the same time. So we hope Auria will appeal to both audio professionals and home recording enthusiasts.

Auria’s got high-end features like a 64-bit mixing engine, AAF import and export, and third party plugin support. At the same time, a beginner can record enable a track, press record and begin recording right away.

Synthtopia: What sort of scenarios has Auria been tested with – or what sorts of things have beta testers been doing with Auria?

Rim Buntinas: Our beta testers have used Auria in all sorts of scenarios.

Some have recorded full bands at venues, using multichannel USB interfaces. Others have recorded at home, in churches, and even mixed on tour busses.

A few of our testers are video professionals, and have used Auria’s optional video import feature to sync music they’ve created on Auria to a scene.

Synthtopia: We’re amazed that Auria can run 48 tracks on an iPad. Will Auria work with the first generation iPad. If so, what can the iPad 1 handle with Auria?

Rim Buntinas: Auria works with all iPad models, but we highly recommend an iPad 2 or later. iPad 3 is best, due to it’s larger amount of RAM

On an iPad 1, Auria’s track count is reduced to 24, with only 4 subgroups (instead of 8), 96Khz sample rates are not available, and the GUI updates are more sluggish on larger projects (the iPad 1 only has a single core processor).

Synthtopia: What can you tell me about workflows with Auria? What options are there for moving projects back and forth to desktop computers?

Rim Buntinas: Auria has an extensive import and export capability.

It imports WAV, AIF, MP3 and AAF files (AAF allows you to move entire sessions from other DAWs like Pro Tools, Logic and Nuendo, including automation and edits).

For moving files in and our of Auria, we support DropBox, SoundCloud, and Audio Copy/Paste. iTunes file sharing is also supported.

Since iTunes file sharing doesn’t allow folders to be copied, Auria gets around this limitation by supporting zip files. You zip up a folder and drop it onto iTunes. Auria automatically uncompresses it when it receives it.

Synthtopia: Are there future plans or a timetable for additional features that you can share? What’s at the top of the list?

Rim Buntinas: Since Auria supports a special iOS version of VST plug-ins, we’re in talks with several plug-in vendors at the moment. You’re likely to see more great plug-ins becoming available in the near future. MIDI support is also something on our list for a future version, along with virtual instrument plug-ins.

Read on for screenshots, full specifications, a demo video and more!

Here’s the official intro video for Auria from NAMM:

FInally, here’s a behind-the-scenes look at the recording of the Auria demo song, tracked entirely on an iPad:

Auria is available now in the App Store for $49.99. See the WaveMachine Labs site for more details.

If you’ve used Auria, let us know what you think of it!

Keep the most exciting part of your composition towards the end. Don’t give it all away in the beginning.