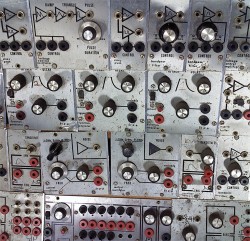 Can Krautrock come from Iowa?

Iowa native Andre LaFosse has a new album, Do The Math, that he describes as “the mad scientist modular synthesizer hauntology krautrock album.”

LaFosse says that Do The Math explores the possibilities of ‘unstable and archaic musical machinery’:

At a time when synthesizers and electric guitars are the most common instruments to be found in popular music, “Do The Math” is filled with unpredictable sounds that shudder and shriek, pumping out streams of noises like patterns of corrupted data.

Give the opener, Retcon, an epic mix of glitch synths, distorted guitars and Zeppelin drums a listen and let us know if it works for you, too:

You can preview entire album via the embed above. It’s available for download via bandcamp.

Synthesizers used on this album include XILS3 LE and PolyKB Player by XILS Labs; Bazille and Tyrell N6 by U-he; Noisemaker by TAL; Synthmaster 2.5 by KV331 Audio; ES-1 by Apple.

You can find out more about LaFosse at his site.