This teaser image has leaked out for the Virus TI Snow Black Edition – a 15th anniversary special edition of the Access Virus TI Snow.

No official announcement has been made yet, but Access has teased an introduction for ‘Black Friday’. For now – here’s what we know about the rumored new synth….. 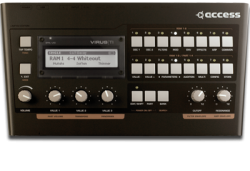 The Snow features 4 multimode parts and about 50% of the polyphony in comparison to the bigger models. Those result in everything in between 10 and 50 voices cranking out the same powerful signature sounds as other Virus TIs. Each voice can use up to four oscillators in parallel, including Virtual Analogue, Wavetable, HyperSaw and Grain Oscillator models. The filter section comprises two independent multi-mode filters with optional Mini Moog emulation and self-resonance. An extensive array of parallel effects enable you to compose highly complex sounds in virtually no time.

In Multi mode, your patches 100% identical and include all of the effects. The 4 independent parts can be routed to 1 Stereo Analogue or 3 USB outputs streaming audio directly into your sequencer workstation. The software suite includes a VST, RTAS and AU compatible plug-in allowing for total recall, sample-accurate timing and modern automation features.

The audio inputs and outputs can be optionally used as a sound card in your sequencer. The hardware knobs can be used to either control the Virus’ sound engine or compatible third party software plug-ins.

Pricing and availability for the Access Virus TI Snow Black special edition are to come.