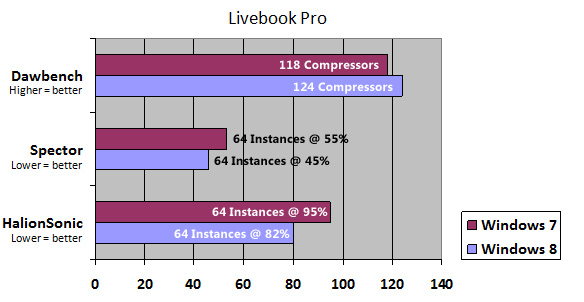 Microsoft’s introduction of Windows 8 has been a controversial one.

Many early users have completely dismissed the new category of Windows 8 RT tablets, because of their lack of compatibility with existing Windows apps. Others are excited by the potential for multitouch apps on Windows 8. And some are confused or annoyed by the two faces of Windows 8’s user interface.

For musician, though, one of the biggest questions has been how music apps perform under Windows 8. We’ve previously reported on Cakewalk’s testing – they found that Windows 8 runs Sonar better, across the board.

Now Rain Computers – maker of media production PCs – reports on their Windows 8 vs Windows 7 benchmarking. Here are the details:

In the majority of tests, Windows 8 beat Windows 7, running on the same hardware. In terms of compatibility  they didn’t find anything that ran on Windows 7 that didn’t also run on Windows 8. Before you upgrade a production machine, though, you should verify that your important apps and hardware will work under Windows 8.

It will be a long time until Windows 8 will overtake Windows 7 for audio production. Based on these benchmarks. though, Windows 8 may offer some performance benefits over its predecessor. See the Rain site for more details.

Check out the video and let us know what you think!