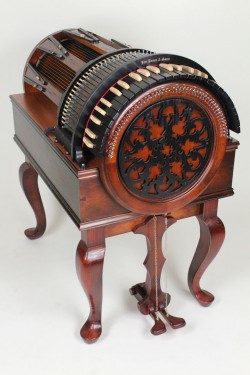 At the 2013 NAMM Show: Antiquity Music is premiering the Wheelharp, a keyboard musical instrument that gives the player the ability to ‘orchestrate’ with a chromatic scale of sixty-one 61 actual bowed strings at one’s own fingertips.

In other words – it’s sort of a steampunk version of an orchestral sound library.

When the player presses any key on the Wheelharp, the action moves the selected key’s respective string toward a rotating wheel with a rosined edge, thereby bowing the string.

With the right pedal, the player controls the speed of a motor that turns the wheel, which varies the bowing speed of the wheel against the string and thus changes the dynamic effect. For instance, the wheel speed and the key depth can both be used to create swells and decrescendos. The action for each note can easily be removed as necessary for maintenance or string replacement.

The left pedal controls a full damper system that extends across the strings. An electromagnetic pickup floats above the strings and a piezoelectric pickup is mounted to the soundboard, allowing for the player to fully control the amplified timbre of the Wheelharp.

Here’s a demonstration of the Wheelharp in action:

According to Antiquity Music, “string instrument sampling and string synthesizers have yielded innovative results that come close to, but frequently fall short of, creating convincing, authentic bowed-string sounds.The Wheelharp vastly improves upon these mechanical instruments by combining a surprisingly efficient design with extensive dynamic control and a full chromatic scale, giving the player a rich sound palette of actual bowed strings that cannot be equaled by synthesis or sampling.”

Here are some audio demos of the Wheelharp:

Manufacturing of Wheelharps is expected to begin in June 2013. See the Antiquity Music site for more info.

Check out the Wheelharp and let us now what you think of it!

We have to move, but we don’t have to dance.