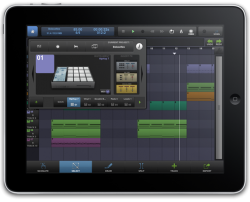 Intua has released an update to BeatMaker 2, adding AudioBus support and more.

BeatMaker 2 is available in the App Store for $19.99. More information on Beatmaker 2’s AudioBus support is available at the Intua site.

If you’ve used BeatMaker 2, let us know what you think of it!

20 thoughts on “Beatmaker 2 Updated With AudioBus”