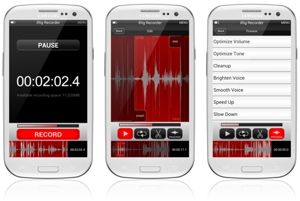 IK Multimedia has announced that  its first Android app, iRig Recorder, is now available on the Google Play Store.

iRig Recorder for Android is an audio-recording app designed to be used as a professional field recorder. It’s a free app and offers recording, multiple effects and sharing features.

iRig Recorder starts recording upon launching the app. The app automatically groups recordings by date, tags them with geographic location information (if the Android device’s location services are enabled) and saves the original file as a backup. Recording time is limited only by the available memory on the Android device. iRig Recorder can be used with the built-in device microphone, or with IK’s microphones and mic accessories.

The basic audio-capture app an be expanded via in-app purchase ($4.99/€4.49) to include waveform editing, which allows for selecting, looping, cutting and cropping of the audio content. Additional automatic onboard audio-processing options can optimize recording levels and tone, remove background noise, and increase the overall audio quality so that anybody can produce professional quality audio on the go. The app can also speed up or slow down a recording without changing the timbre, and, with its onboard processing and editing features, it’s possible to produce podcasts or other audio productions, all without leaving the app.

iRig Recorder for Android is available via Google Play. For more information, check out the IK Multimedia site. 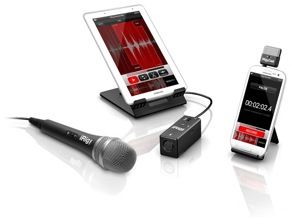 Although the iRig Recorder app works with the built-in microphone on the Android device, IK Multimedia recommends use of an external microphone for highest-quality results. The company offers these options for use with Android smartphones and tablets (pictured):

iRig Recorder for Android is available now on the Google Play Store for free. Editing, and additional effects processing can be added via in-app purchase for $4.99/€4.49.