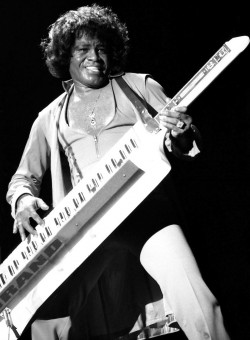 The 88-key piano action keyboard has always been the ‘gold standard’ for keyboardists. So it should come as no surprise that, over the years, synth designers have tried to bring the feel and playability of the grand piano to the keytar synthesizer.

Unfortunately, the Keytar Grand, despite 40 years of effort from the greatest synth minds of the last two generations, has failed to garner much interest from players. We asked keyboard historian Mark Fail why the Keytar Grand has struggled to find its niche.

“The early 70’s Keytar Grands were made with discrete electronics,” he notes. “As a result, they could easily tip the scale at 200 lbs or more.”

James Brown, above right, was one of the first musicians to attempt live performance with a Keytar Grand. His interest in the instrument was short lived, though.

“Finally, I told the horns to take it to the bridge and drop it. I had to tell them to ‘Drop it!’ two times before they threw that thing in the river.”

Brown wasn’t the only musician to attempt playing the Keytar Grand live. Keyboardist Rick Wakeman was also an early adopter.

“It’s true that your back would tend to lock up when you played the Keytar Grand,” notes Wakeman. “But that was a perfect opportunity for an extended improvisatory flight of fancy.”

“What put me in hospital was when I started using a dual axe rig, with a Keytar Grand on my right shoulder and the Mellotron 8800 on the left shoulder.”

Second generation Keytar Grands became available in the early 80’s. But despite 10 years of technical advances, the combination of an 88-key fully-weighted keyboard and discrete analog circuitry made the instruments of the day only slightly lighter.

“My back would always sieze up right in the middle of a solo,” explains Hancock. “My chiropractor told me that, if that happened, I should gently rock back and forth to loosen my back up. As a result, if you watch any of my old eighties performances, don’t be surprised if you see me grimacing and shouting ‘Rock it!’ during the keytar solos.”

After causing so much agony over the years, the Keytar Grand was forgotten for nearly two decades. Only recently have musicians begun to show interest in the much-maligned axe.

Fortunately, advances in electronics have brought the weight of the Keytar Grand mkIII down under 100 lbs. In fact, keytar fan Lady Gaga is said to be having a custom mkIII made for her next tour.

We asked Gaga about her one-of-a-kind Keytar Grand.

“It’s going to be covered in raw meat,” explains Gaga. “I’m going to call it the
Meat-tar.”

13 thoughts on “The Keytar Grand – A Short History”