Vangelis And The Journey to Ithaka is a new documentary on the Greek composer.

In this brief except from the film, we get a look at the custom set up that Vangelis uses and how he uses it to create improvised symphonic electronic compositions. 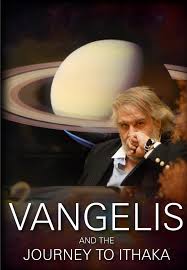 Here’s the official description for the film:

The two-hour documentary includes interviews with Vangelis and many of his friends and colleagues, including Sean Connery, Hugh Hudson, Jessye Norman, Oliver Stone, Akiko Ebi, Julian Rachlin and many others. It also includes rare, historical footage, most of which has never been seen before. Another highlight includes recent footage of Vangelis improvising new music!

Vangelis, a composer of electronic, ambient, jazz, pop/rock and orchestral music, is best known for his Academy Award winning score for the film Chariots Of Fire, and composing scores for the films Antartica, Blade Runner, 1492: Conquest Of Paradise and Alexander, as well as the use of his music in the PBS documentary Cosmos: A Personal Voyage by Carl Sagan.

Vangelis began his professional music career working with several popular Greek bands in the ’60s such as The Forminx and most notably Aphrodite’s Child. Throughout the 1970s Vangelis composed music scores for several animal documentaries; the success of these scores brought him into the film scoring mainstream.

In the early ’80s, Vangelis teamed up with YES vocalist/songwriter Jon Anderson. The duo recorded a series of successful and critically acclaimed albums under the name Jon & Vangelis. In 1981 Vangelis composed the score for the Oscar-winning film Chariots Of Fire, which won him an Academy Award for Best Original Music Score. The soundtrack’s single ‘Titles’ reached the top of the American Billboard Hot 100 chart and was most recently used as theme music at the London 2012 Olympics.

In a career spanning over 50 years, writing and composing over 50 albums, Vangelis is regarded as one of the greatest composers of electronic music of all time. And now, the new documentary ‘Vangelis And The Journey To Ithaka’ celebrates the music legend’s illustrious and fascinating career!

Vangelis And The Journey to Ithaka is available now on DVD via publisher Gonzo Multimedia.

My first source of inspiration in my life, since I was a student, is the gear – the technology and the instruments