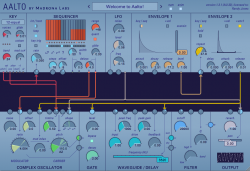 Madrona Labs has released Aalto 1.5 – an updated version of its software modular synthesizer for Mac & Windows.

Version 1.5 has some major compatibility improvements for both Windows and Mac users. Performance should be dramatically improved on some Windows systems.

The new version has a new OpenGL-assisted renderer, so graphics are amazingly sharp, at full Retina resolution, in compatible hosts. This change means that using a tiny little Aalto window is now possible, which can really improve workflow on a laptop screen. (Note: Ableton Live does not yet support full-resolution rendering.)

Free demo versions are available at the Madrona Labs site.