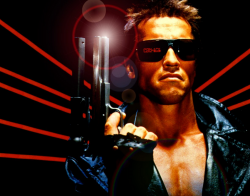 30 years after its release, people are still debating the time signature of the main theme from The Terminator:

As The Terminator celebrates its 30th anniversary this year, the film continues to raise important questions. What are the risks to humanity of ascendant machine intelligence? How does a society correct the catastrophic missteps in its own past? And, most important, what the dickens is that weird time signature in the film’s score?

The other day, upon realizing that 2014 marks three decades since the film was released, I decided to stream the cautionary robot fable to see how it held up. I didn’t make it past the opening titles.

Here’s the synthtastic Terminator Theme from Brad Fiedel’s score to The Terminator:

On his site, Fiedel notes, “Terminator was very difficult because I was using many different synths and sequencers and because I didn’t have MIDI available on many of them I had to sync them by hand. This is why the main theme is in a very odd time signature. The looping of the Prophet 10 was just a little short of a complete measure.”

According to Slate’s Stevenson, the unusual time signature was a happy accident that resulted, in part, from limitations in the electronic music technology available to Fiedel in the 80s:

He first set up a rhythm loop on one of the primitive, early ’80s devices he was using. (In those days, Fiedel was firing up a Prophet-10 and an Oberheim.) He recorded samples of himself whacking a frying pan to create the clanking sounds. Then he played melodic riffs on a synthesizer over the looped beat.

Amid the throes of creation, what he hadn’t quite noticed, or hadn’t bothered to notice, was that his finger had been a split-second off when it pressed the button to establish that rhythm loop. Which meant the loop was in a profoundly herky-jerky time signature.

Fiedel’s and Stevenson’s explanations, while interesting, don’t really account for the continuing debate about the Terminator Theme. Give the score a listen, though, and you’ll hear the theme presented two different ways:

Does the fact that the theme is presented with two different rhythmic cycles explain why it’s still puzzling musicians, even after 30 years?

63 thoughts on “30 Years Later, People Are Still Trying To Figure Out The Time Signature Of The Terminator Theme”

I have always been convinced that electronic music would become the biggest musical genre. Because paradoxically, it isn’t a genre like hip hop, rock or punk. It is a new way of thinking about musical creation, composition, writing and even distribution.