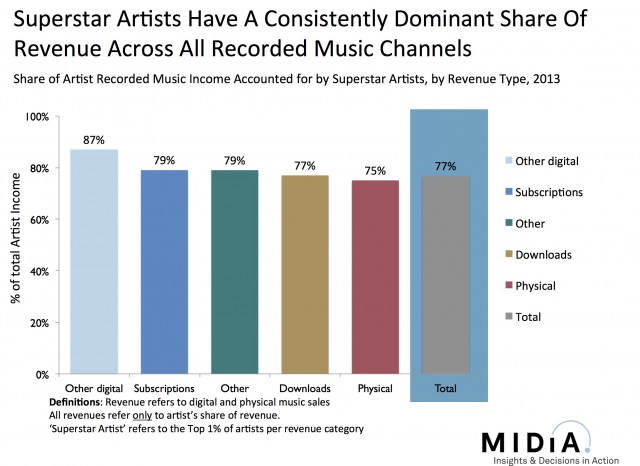 In the The Death of the Long Tail: The Superstar Music Economy, they’ve found that the 1% of musicians make 77% of the money:

The music industry is a Superstar economy, that is to say a very small share of the total artists and works account for a disproportionately large share of all revenues.

This is not a Pareto’s Law type 80/20 distribution, but something much more dramatic: the top 1% account for 77% of all artist recorded music income.

The also argue that the concept of ‘The Long Tail’ – the idea that the rise of the Internet and the democratization of media would make it easier for niche artists to make a living – is BS:

The concept of the long tail seemed like a useful way of understanding how consumers interact with content in digital contexts, and for a while looked like the roadmap for an exciting era of digital content.

Intuitively the democratization of access to music, both on the supply and demand sides, coupled with vastness of digital music catalogues should have translated into a dilution of the Superstar economy effect.

Instead the marketplace has shown us that humans are just as much wandering sheep in need of herding online as they are offline.

In fact digital music services have actually intensified the Superstar concentration, not lessened it (see figure). The top 1% account for 75% of CD revenues but 79% of subscription revenue.

This counter intuitive trend is driven by two key factors: a) smaller amount of ‘front end’ display for digital services, especially on mobile devices, and b) by consumers being overwhelmed by a Tyranny of Choice in which excessive choice actual hinders discovery.

The last part seems especially important for musicians working outside of the mainstream.

While record stores used to provide a venue for music fans to browse a huge variety of music, screenspace at online retailers tends to be dominated by a few mainstream artists.

Do niche musicians trying to make money have it harder than ever? Leave a comment and let us know what you think!

The holy grail for a music fan, I think, is to hear music from another planet, which has not been influenced by us whatsoever. Or, even better, from lots of different planets. And the closest we got to that was before the Internet, when people didn’t know of each other’s existence.