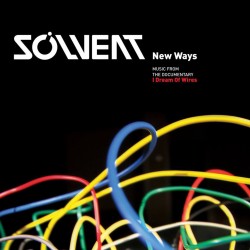 At Moogfest 2014, we had the opportunity to see the US theatrical premiere of the modular synth documentary, I Dream Of Wires (IDOW).

Jason Amm, aka Solvent, was there and was selling copies of his soundtrack to the film, New Ways. We picked up a copy of the vinyl release, which is a gorgeous 2 x 12″ + 1 x 7″ package. 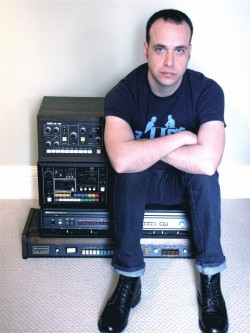 Amm, right, partnered with director Robert Fantinatto to help write and produce I Dream Of Wires. The film looks into the origin, demise and renaissance of the modular synthesizer. It features interviews with Trent Reznor, Vince Clarke, Chris Carter, Daniel Miller, Flood, John Foxx, Bernie Krause and dozens of other electronic musicians and manufactures.

As you might expect, Amm’s soundtrack was heavily influenced by his other work on the documentary. According to Amm, he looked on the soundtrack LP as a challenge; he was determined to expand his synthesis palette with the new possibilities of modular, but with a focus on completing a body of work.

The album title, New Ways, is a lyric from the Gary Numan song, I Dream of Wires, from which the movie gets its title. It also refers to Amm’s new palette of Eurorack synth modules.

The music of New Ways balances exploring the more experimental side of modular synthesis with strong melodic phrases and propulsive synthesized beats. The soundtrack seems to embrace elements of both East- and West-coast style modular synthesis, the experimental sounds of the late sixties, the industrial rhythms of the late seventies and more modern electronic sounds.

Amm has shared tracks from the soundtrack on Soundcloud, so we’ve embedded them below for your reference: 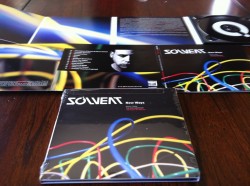 As noted above, the packaging for the soundtrack is excellent. The liner notes will be of special interest to synthesists, as they offer technical notes for each for the tracks. Not only does Amm discuss specific modules he used in the creation of each track, but he explains some of the inspiration behind each track and some of the techniques he wanted to explore.

The Solvent’s New Ways can be appreciated on many levels: as pure music, as a soundtrack to the film and as an example of the possibilities of modular synthesis. Both it and the I Dream Of Wires documentary are highly recommended.

You can purchase New Ways via Suction Records on Bandcamp or via Amazon. I Dream Of Wires is currently in its shortened theatrical release format, and is also available in the four-hour geektacular IDOW: Hardcore Edition.