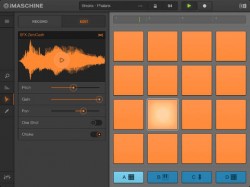 The update adds iPad optimization, sampling from iTunes, sample editing features and more. The updates add up to a much more powerful iMaschine, moving it further into music production center territory.

iMaschine is designed to let you create “music sketches” with an iPad or iPhone. The update features a new user interface and an optimized layout for iPhone 5, iPad and iPad mini.

On the iPad, the modified iMaschine interface allows two-handed operation. Editing and performing functions are now on the same window as the application’s 16 drum pads, 2-octave keyboard and the audio recorder, smoothing its workflow.

The update also includes an addition to the standard library, the “Quantum Collection”, an iMaschine expansion featuring a choice selection of sounds from the recently released Maschine 2 Library. iTunes sampling allows users to capture parts from the music on their iOS device and edit the samples’ start and end points.

The update also brings easier writing and performing, with a number of workflow enhancements.

X/Y performance controls are a new way to perform effects. A swipe redo/undo function contributes to a faster workflow. Lastly, listening to requests from the iMaschine community, this iMaschine update adds a metronome on/off switch.

The second video takes a look at beatmaking and workflows with iMaschine: