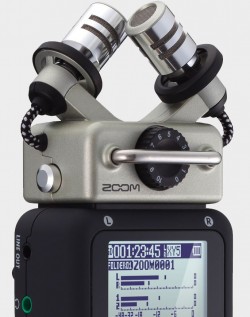 Similar to the H6 flagship that was announced last summer, the H5 employs a system of interchangeable input capsules, allowing the right microphone to be used for the right situation.

In addition to being fully compatible with all Zoom input capsules, the H5 comes with a new X/Y stereo capsule, featuring extended signal capacity—up to 140 dB SPL—and shockmounted microphones for reduced handling noise.

Here’s a video introduction to the Zoom H5:

Additional features include a stereo Line Out for connection to camcorders; a headphone jack and built-in speaker; onboard effects, metronome and chromatic tuner; adjustable playback speed and pitch correction; and Pre-record, Auto-record and Backup-record functions. A USB port enables data transfer to and from editing software and allows the H5 to serve as a multichannel audio interface for computers and iPads.

The Zoom H5 is expected to be available in June for $269.