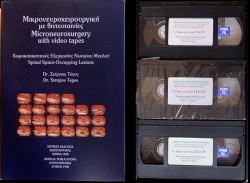 One of the frustrations of fans of synthesist Vangelis is the huge volume of his soundtrack work that remains unreleased.

Blade Runner fans are still pining for a comprehensive soundtrack. The soundtracks to films like Missing, The Plague and The Bounty are only officially available in fragments.

And then there’s his soundtracks for Cavafy, Francesco, Splendeur Sauvage and many other films that have never been officially available.

The Tegos Tapes is an interesting example of these obscure Vangelis soundtracks.

The Tapes were created by surgeon Dr. Stergios Tegos, and contain educational examples of his microneurosurgery work. Tegos asked Vangelis to create a soundtrack for the videos and Vangelis agreed, composing nearly 12 hours of some of his more ambient music.

This music was lost to obscurity for years, because of the esoteric nature of the videos.

This changed when Vangelis Collector’s Don Fennimore came across a copy, while traveling in Greece, and wrote about it at his site.

Vangelis’s music for The Tegos Tapes will probably never get an official release, but Neville Dorrington, co-host of the long-running Australian ambient music radio show, Ultima Thule, has shared edits of the soundtrack via Soundclound for streaming listening.

You can listen to The Tegos Tapes via the embed below:

“Every human being, animal, plant or mineral carries the imprint of the cycle of Creation.

Sound has always followed the sequences of change in this cycle, like a code carrying the function and dimension of the universe, being at the same time its generator. Let us go deep into our memory (and remember), by doing this, we will be able to decode the code of the Creation of the universe and, therefore, our own.

What an extraordinary and divine key is music!”

15 thoughts on “Vangelis – The Tegos Tapes”