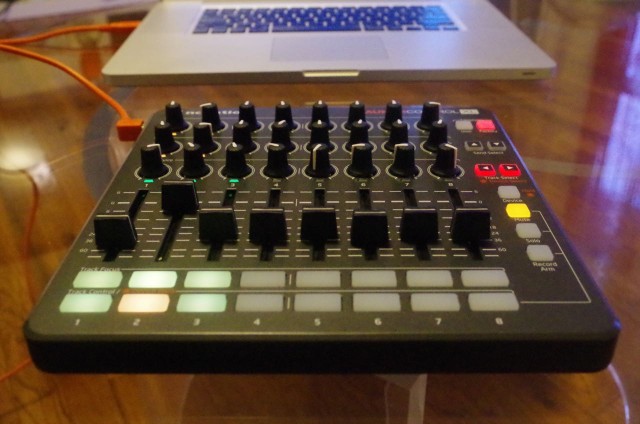 Novation recently introduced the Launch Control XL – a new MIDI controller that they call ‘the ultimate controller for Ableton Live’. 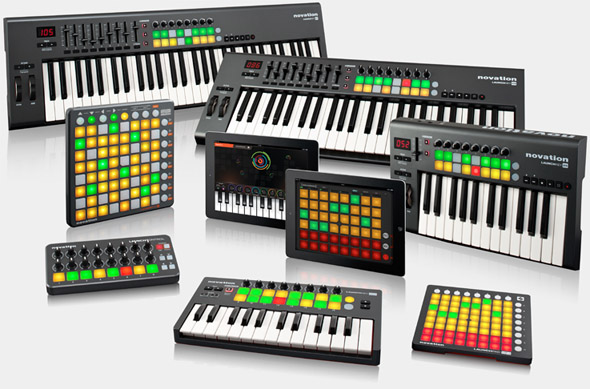 It’s great to have so many options – but where does the new Launch Control XL fit in? 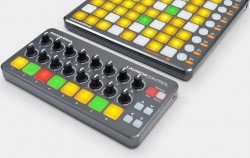 The Launchpad S is primarily an 8×8 grid controller. The original Launch Control is designed to be an add-on that brings 16 knobs and 8 pads to your system.

The new Launch Control XL is still designed to be a companion to the Launchpad S, but the XL version takes everything about the original up a notch.

How does this fit into your Live workflows? Let’s take a look…

It’s obvious that Novation put a lot of thought into the Launch Control XL, because it complements the 8×8 Launchpad S on many levels. It has the same general look and feel as the Launchpad S, so it feels like each was conceived as part of a larger system.

But, while they are visually similar, Novation uses different shapes, sizes and positions for each type of control, helping to delineate their functions. Finally, the choice of controls on the Launch Control XL nicely fills in the gaps on the Launchpad S.

Their second video, below, explains the setup: 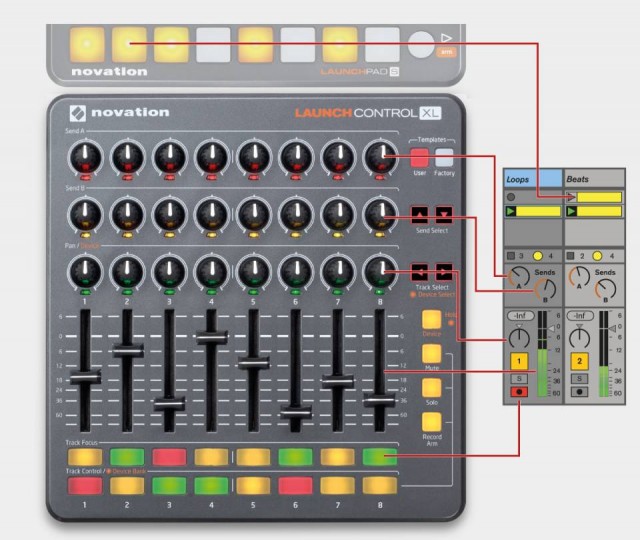 Getting Started with the Launch Control XL:

The key thing to understand about the Launch Control XL is its primary purpose – as a companion to the Launchpad S for controlling Ableton Live. If you use it for that purpose, you will probably be able to just pull the XL out of its box, plug it in and start playing.

If you want to use it in other ways, you can because the XL is a Class-Compliant MIDI controller. You may need to do some additional configuration, though.

The XL’s build quality seems very comparable to the Launchpad and Novation’s other controllers. The pots feel solid and turn with just a little resistance. The faders have a bit of left-right wiggle to them, but still provide good ‘feel’. And the buttons – while they are smaller than the Launchpad S, have the same feel. 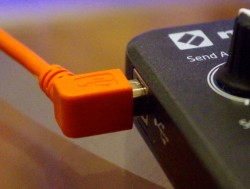 The only aspect of the XL that seemed less than ideal to us was the USB connector.

The connector on the XL side of the USB cable is a little longer than the socket is deep, so the cable doesn’t sit flush against the controller’s body. As a result, there’s more wiggle than there would ideally be on the USB connection.

If you are using the XL with a Mac or Windows compute and Live, the XL is a plug and play solution. Just connect to the computer via a USB jack, launch Live and you can get started.

If you want to use the XL with iOS, you need to switch the XL to low-power mode first. This is covered in the XL’s Getting Started Guide, which you can download from Novation’s site. You’ll also need a Camera Connection Kit adapter, since the XL’s USB connector is a standard USB male connector.

Templates control how the controls on the XL map to to MIDI commands. 16 template slots are available:

If you want to create a custom template, a software editor is provided that allows you to do it: 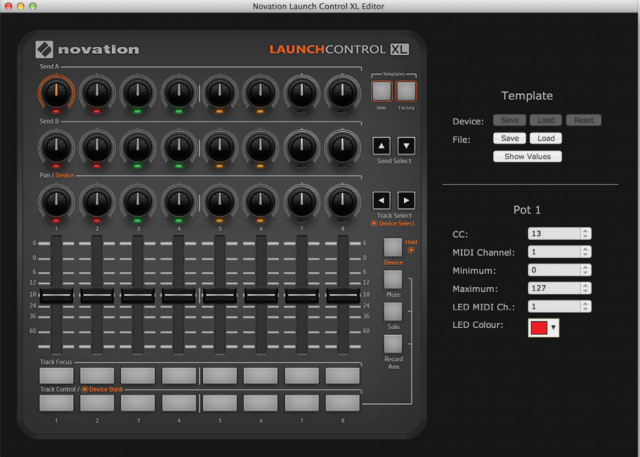 For example – in the above screen shot, Pot 1 is highlighted. On the right side of the app, the current settings are displayed and you can customize the MIDI values that will be sent by each control.

If you want to dig further into programming the XL, a Programmer’s Reference (on the Novation download page) is provided. It documents computer-to-device and device-to-computer messages that allow you to do things like control the color and state of each LED and more.

If you want to go further and create an ultimate multi-device Ableton Live uber-controller, you may want to check out the software solutions from Isotonik. They have created several inexpensive apps that expand the usefulness of the XL:

Novation Launch Control XL is an inexpensive way to bring a new level of hands-on control to Ableton Live. Combined with the LaunchPad S, the XL lets you create a powerful, customized Live uber-controller.

The Novation Launch Control XL is available now with a street price of about $200. It’s available via Amazon, Zzounds and other online retailers. You can find more information on the XL at the Novation site.

Have you used the Launch Control XL? If so, leave a comment and let us know what you think of it!