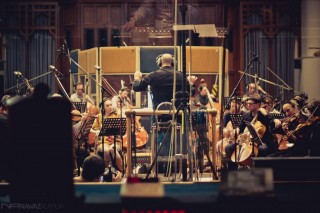 Are virtual instruments getting good enough to replace a traditional orchestra?

That’s one of the questions raised by an interesting series of posts at sound design site AudioCookbook.

UK composer Tom Player has been sharing a series of examples, looking at synth mockups of his compositions and comparing them to the final recordings with real orchestras.

“I hear lots of sample mockups, and undoubtedly they are getting better – but there really is something irreplaceable about a live orchestral performance, which to me will always be preferable,” notes Player. “For one, there is the sound – but it stretches further than this, with the psychology of writing better music once you know it’s going to be played live, and so many other factors.”

His first example, below, compares two sections from his composition Beckoning. With each section, the example features first the virtual instrument arrangement and then the orchestral version.

Here’s what Player has to say about his first example:

It’s a simple line, recorded in isolation. This is probably one of the hardest tasks for a convincing midi demo… simplicity in isolation. In the real recording, the orchestra breathes as one. Literally – you can hear the breaths as the leaders of each section signal to the rest of the players to come in.

Interestingly, there’s some debate at the site, suggesting that Players comparisons aren’t valid, because his virtual orchestrations are primarily intended to be functional representations of the music, while the orchestral version are intended to be expert-level performances.

Reader Pedro Almeida shared an example of a more expressive virtual orchestration of the same theme:

The series does more than just compare live orchestra vs virtual instruments. It highlights the state of virtual orchestration and makes the case that an expressive performance, whether with ‘real’ or ‘synthetic’ instruments, transforms notes into music.

This example is just the first of a planned series of six orchestra vs virtual instrument posts. See the AudioCookbook site for parts 2, 3, 4 & 5.