It’s built around Axoloti Core, above, a circuit board with stereo audio in- and output, audio analog-to-digital and digital-to-analog converters and a microcontroller, suitable for digital audio processing.

All connectors are on one side to make it easy to build your own tabletop device, rackmount, stompbox or something else. 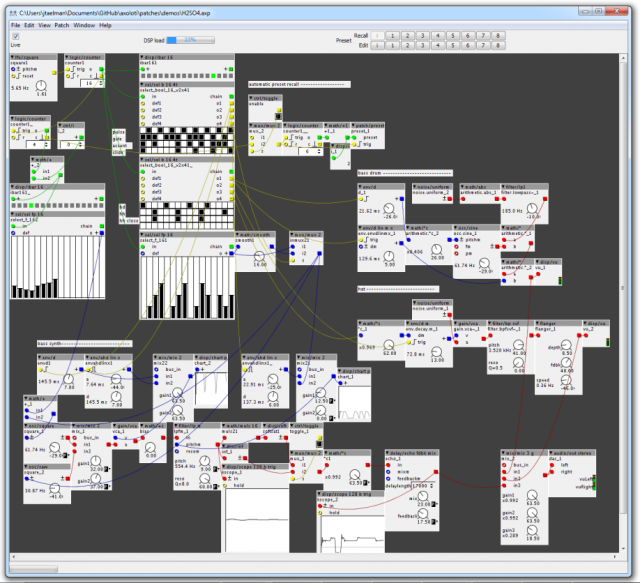 The Axoloti patcher is written in Java and works on Windows, OSX and Linux.

When you’ve created a patch you like, the Patcher a binary executable code and uploads the executable to the microcontroller, with one single mouse-click. After uploading, the patcher “locks” the patch architecture, and parameters in the patch can be adjusted in real-time on the screen (or from a midi controller).

Here’s the official introduction to Axoloti:

The next video demonstrates how to set up a synth patch:

Here’s a demo of a ‘Hoover’ style patch on the Axoloti:

Once you’ve created a patch and loaded it to the Axoloti, you can use the hardware ‘brain’ to create custom synthesizers and audio devices.

The Axoloti supports a variety of hardware controls, including:

Axoloti is being developed as an IndieGoGo project. The project has currently €6,130 of a €25,000 goal. See the project site for details.