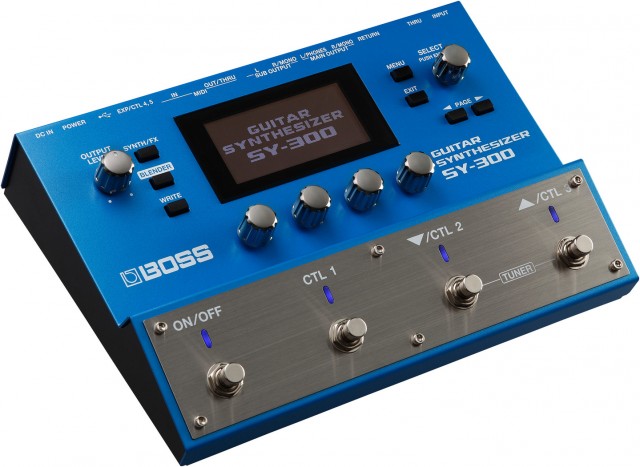 At Musikmesse 2015, Boss introduced the SY-300 Guitar Synthesizer – a polyphonic synth designed to work with all your guitars, with no special pickup required. 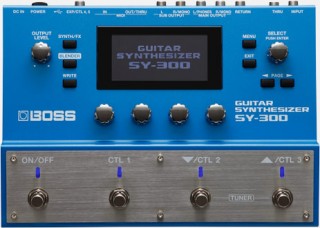 Unlike other products that require a special GK pickup and 13-pin cable to access synth voices, the SY-300 can be used with any guitar or bass via a standard 1/4-inch cable. It also integrates with stomps and pedalboard setups.

According to Boss, the SY-300 performs its synthesis in real time, with no lag whatsoever.

The SY-300 is equipped with a polyphonic synthesis engine with three separate sections. Users have complete freedom to build sounds, with a full palette of synthesis parameters, including different wave shapes, filter/amp controls, and LFOs.

There’s also a step sequencer (with tap tempo control) for creating dynamic melodies and arpeggios by playing a single note.

Beyond its synth voices, the SY-300’s synth engine can also be used to process a normal guitar sound to create unique textures. Users can apply synth filters, change attack and decay characteristics, and create dynamic movement with the LFOs and step sequencer.

The SY-300 also includes powerful multi-effects to enhance both synth and straight tones. Four simultaneous effects engines are available, each packing a number of effects types including overdrives and distortions, Slow Gear, Isolator, Slicer, and many others. Some types can perform two effects at once, such as chorus and delay or delay and reverb.

The SY-300 includes a USB audio interface to capture audio tracks directly into music production software on a computer. Via USB, users can also route existing tracks into the SY-300 to “re-synth” sounds using the synth engine and effects to create new sounds for music productions.

See the Boss site for details.