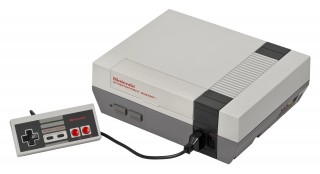 In this post, guest author Joe E. Allen takes a look at making 8-bit music with FamiTracker  – a free windows tracker for producing music for the NES/Famicom-systems.

How To Make 8-Bit Music:
An Introduction To FamiTracker

In this series, I’ll be introducing programs that you can use to make music on old video game consoles, or more specifically, the sound chips found inside these machines.

Each of these programs can be learned using information and tutorials found online – so through this series, I hope to simply offer an overview of the software/hardware in question and the artists that use it. Perhaps this will whet your appetite and encourage you to learn more in your own time. 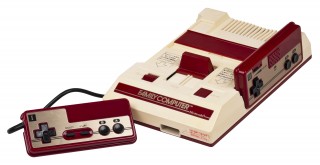 One of the best places to start is the Nintendo Entertainment System, above, or the Famicom, right, as it was known in Japan.

Before we go any further, here’s a reminder of the sound of the 2A03. It comes from one of the most acclaimed NES soundtracks – Silver Surfer – which came out in 1990:

The music for Silver Surfer is by Tim Follin and Geoff Follin.

If you want to make music like the soundtrack to Silver Surfer, the free app FamiTracker is one way to do it. 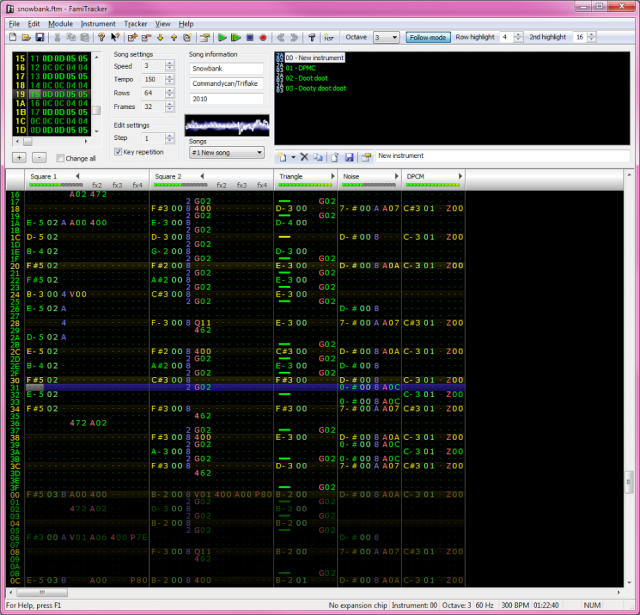 FamiTracker, above, is a free Windows tracker for producing music for the NES/Famicom-systems. One of the features of FamiTracker is NSF-file exporting. That allows music created in FamiTracker to be played on the real hardware, or to be used in NES-applications.

Created by jsr, FamiTracker is a Windows application that emulates the 2A03 chip – and its various expansion chips – and lets you program music in the tracker style (rows, which are filled with various data and then scroll upward during playback).

FamiTracker has been around for about a decade, and new versions are released fairly regularly. You can grab it as a free download over at the FamiTracker site.

If you don’t have a Windows OS computer, try using FamiTracker through a Windows emulator, such as Wine.

Note that much of the best chiptune music strays outside of this system and uses the channels in more creative ways.

For example, in FamiTracker the Triangle frequencies are often used to synthesise a tom-tom percussion sound that can’t be achieved via the noise channel. 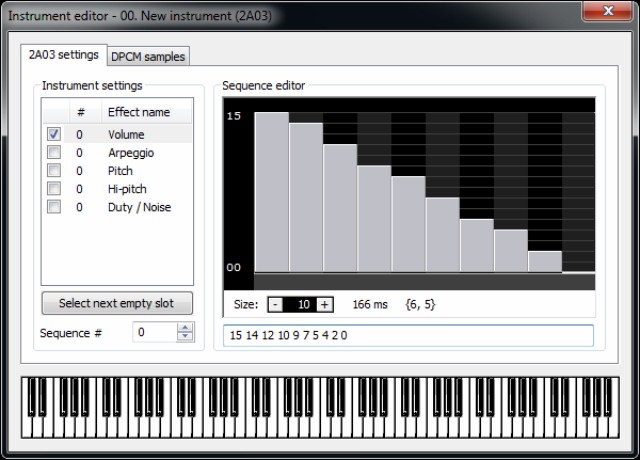 Unless you’re using samples, each instrument is created/synthesised using FamiTracker’s instrument editor, above.

Once you’ve created a blank instrument you can edit its sound using five parameters: ‘Volume’, ‘Arpeggio’, ‘Pitch’, ‘Hi-pitch’ and ‘Duty / Noise’. Values can be entered numerically, or by dragging and editing using the graphical interface.

Experimenting with numbers and sequences can yield some unexpected and interesting sounds, or you can get started using instruments that others have shared online.

Samples are also commonly used to create sounds, including: percussion sounds like a kick or snare; vocal samples; or something more creative. Samples can be imported into FamiTracker as a WAV or PCM file, using the instrument editor.

Once you have your instrument ready, creating a melody works like any other tracker: select a channel and a row and then choose a note and an instrument to play the note. You can also hook up a MIDI keyboard and input notes that way if you like, and by sequencing multiple notes and patterns, you’ll be on the way to a whole song. 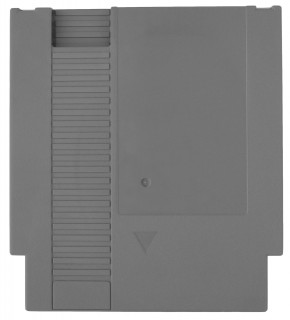 Most music written in Famitracker will eventually end up in MP3 form, but there’s also the option to create a NES Sound Format file (NSF). NSF files can be played back using a variety of NSF players.

Or, if you’re feeling really adventurous, you can modify an actual NES cartridge, right, to house the NSF file, meaning your music can be played back through a NES console.

Here are a series of videos, via 8BitDanooct1, that take a look at getting started with FamiTracker:

Famitracker Tutorial Part 1 – The Instrument Editor and You

You can find more FamiTracker examples at the 8BitDanooct1 YouTube channel.

Here are some examples of the work of musicians using FamiTracker:

Master of a variety of sound chips and synths, Alex Mauer has been using FamiTracker since its inception. His EP, Eat People II was the first ever release to use FamiTracker, and his Vegavox series was the first example of music released on an actual NES cart (the carts have long since sold out).

Based in Japan, chibi-tech redefined what was possible with the 2A03 on her 2012 release, Moe Moe Kyunstep. Creating a huge-sounding chiptune/dubstep work, this stands as a landmark pointing to what’s possible using nothing but the NES sound chip and Famitracker.

Following in the footsteps of more rock-based outfits such as Anamanaguchi and The Depreciation Guild, (T-T)b write cute melodies in FamiTracker which they then play along to in a live band setup.

See the resources below for more information on FamiTracker.

And leave a comment and let us know what you think about FamiTracker and what you’d like to know more about 8-bit music making!

26 thoughts on “How To Make 8-Bit Music: An Introduction To FamiTracker”

The orchestral composer is open to all the problems and conceits of the architect, liable to be trapped in a form that is inherently nonimprovisational, nonempirical. I shouldn’t be so absurdly doctrinaire, but I have to say that I wouldn’t give a rat’s ass if I never heard another piece of such music. It provides almost nothing useful for me.