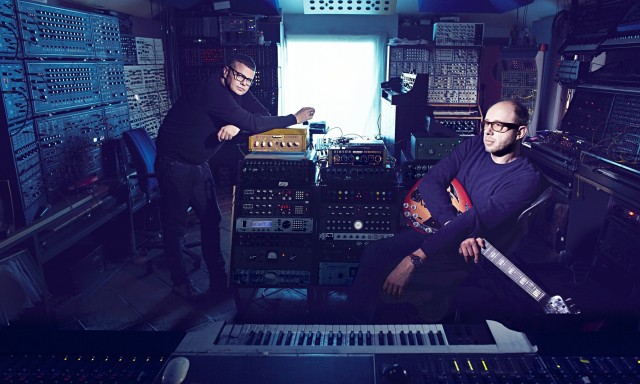 The Chemical Brothers, Ed Simons and Tom Rowlands in the photo above, have a new album on the way, Born in the Echoes.

They are featured in a new interview at The Guardian, in which they share their thoughts on 20+ years of partnership, the new album and what it’s like to work in their drool-worthy studio.

They also suggest that the heart of their sound is the little noises’ that they make with all that gear:

“You know those little noises you’ve got that you can’t really hear? They’re really good. You should do records that just have those.”

The heart of the Chemical Brothers resides in those little noises.

“That’s what all the months in the studio are: trying to find those little bits when you’re overwhelmed by what’s coming out of the speakers,” says Rowlands. “It’s still chasing that feeling. It’s so easy to make a massive-sounding tune. It’s like shooting fish in a barrel. We try to hit something that’s slightly wrong but still feels good: a strange but necessary record.”

Here’s a preview of Born in the Echoes, Sometimes I Feel So Deserted:

Born in the Echoes Tracklist:

48 thoughts on “The Chemical Brothers Studio Will Make You Drool”