This video captures a performance by Jay Wasco on his amazing Frankeninstrument, the Fractal Harp.

In the video, Wasco performs Elegant City. Here’s what he has to say about the performance: 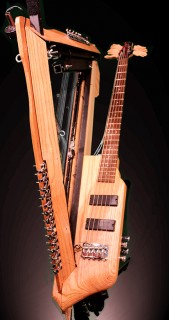 The tune features the newly minted upright version of the Fractal Harp. The new prototype, crafted mostly from oak, includes keyboard & trigger elements and features a 5 string bass. The performance here was tracked live, in real-time keeping the intro/top of the piece (written on the instrument(s)) somewhat sparse & basic so you’d get the gist of what this is and how it works.

The Fractal Harp: The 28 string slide harp is what it is and as you see, fairly basic. “Invention”, yes. It’s a harp/guitar with a pivot slide that can be played with two or one single hand.

Beyond the obvious, it seems to me that some asshole should have figured this shit out back in the 3rd century but who am I to judge?

….anyway, past all that, there’s a foot pedal that acts independently on specific harp strings in order to bend/manipulate pitch and intervals in a way reminiscent of a pedal steel guitar. The harp uses standard electric guitar strings with a 14 inch wide custom built pickup mounted close to the upper bridge.

The proximity of elements as well as slide & midi have significantly evolved and have been refined since the last prototype visible in various situations here.

The harp also employs a midi system on its lowest strings comprised of piezo transducers acting as triggers. These function from independent strings and are used to generate real time/simultaneous drum and percussion arrangements on the fly matching & rhythmically mirroring that of the harp. Drum/percussive sounds and dynamics are determined by the specific string played and how hard it’s picked/strummed/plucked (via midi velocity). The system works with corresponding software I’ve battled evil little computers to develop. There’s also a separate set of triggers (long oak keys) between the keyboard and the harp playing the many cymbal swells on this particular piece.

The 5 String Hammer Bass: It’s comprised of solid oak includes a pitch to midi out function applied selectively and sparingly using a momentary switch enabling the player (yes, that would be me) to engage midi assist ONLY on specific notes. In the case of the video here, the power chord/clusters throughout the song’s middle 8 section (2:20) with hits at 2:32 are examples.

Keys: The keyboard/usb controller is crowned with oak overlays giving weighty substance to the minimal plastic keys beneath (I still don’t get why keyboards are made of black and white plastic) I’ve developed several complex sample patches/sounds for my collection of custom instruments over the past few years some of which you hear in this video (if only briefly on the tunes middle 8 section- 2:20) featuring the Takamine acoustic part that comes in at the top of the final section.

The Herb-Alpertron: The melodic horn melody part of this piece sound is created using a simple pitch to midi converter controlling a sample patch I’ve created that allowing me to actually sing the trumpet part. Though fairly basic, the setup strangely mirrors the complex and expressive interval series between notes produced by actual horn /wind instruments.

Looking forward to creating a lot of music on this but my mind is already drifting to improvements on the next one. Hope you enjoy the music.

Check it out and let us know what you think of the Fractal Harp!