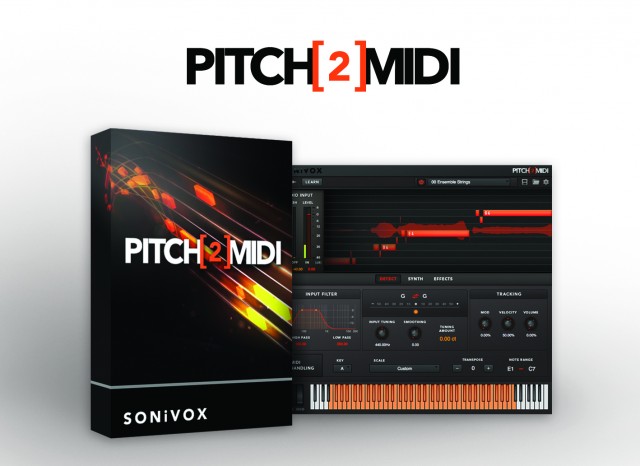 Designed with singers and (acoustic) instrumentalists in mind, Pitch2MIDI gives these artists the ability to play and record music with software virtual instruments. SONiVOX’s Pitch2MIDI software plugin doesn’t require the user to record their audio first, then stoping and waiting to hear the results as the audio is pre-processed. The Pitch2MIDI software works in real time, immediately converting the audio signal into MIDI events so the artist can hear the results while singing or playing.

How it works. Pitch2MIDI is an audio effect plug-in that takes real-time vocal or instrumental monophonic audio input and instantly transforms it into accurate MIDI output. Using the built-in synthesizer, artists can use their voice or instrument to play any one of over 100 synth sounds directly, or bypass the internal synth and send MIDI Out to any of hundreds of popular virtual instruments on the market. Because it is real-time, recording the audio first or processing it before hearing the results is no longer necessary.

SoniVox developers also believe that Pitch2MIDI will be of great use to producers as well as well as artists. Producers can immediately add new sonic layers and textures to their audio tracks, without needing to do any post-recording processing, removing the “record-then-process” obstacle.

Pricing and Availability. Pitch2MIDI by SONiVOX is available for download now for $149.99 USD at SONiVOX. For more information, visit the SoniVox website.