New England Digital’s Synclavier was originally introduced in 1979, and, back then, cost as much as a house.

But, because of its unique capabilities, the Synclavier quickly found its way into top studios, movie soundtracks and recordings, including iconic albums by Michael Jackson (Thriller), Sting (The Dream of the Blue Turtles), Pat Metheny (Are You Going With Me?) and George Michael (Faith). Frank Zappa even recorded the entirety of his final Jazz from Hell album using the Synclavier alone.

To recreate the Synclavier, Arturia partnered with original Synclavier co-founder and programmer Cameron Jones. Arturia tried to be faithful to the original instrument’s interface design, even as they added new ones.

“We even used part of the original code,” They note, “It doesn’t get more authentic than that.”

The unique sound of the Synclavier V comes from its blend of additive and FM synthesis, with control over 24 additive harmonics on both the carrier and modulation oscillators.

Where the original instrument let you mix four uniquely programmed Partials Timbres in a Timbre preset, Arturia’s recreation has twelve, boosting your creative possibilities exponentially. The Time Slice engine allows complex evolutions of the sound over time—even several minutes if you want.

Here are the official video tutorials: 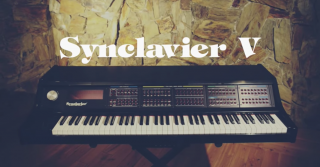 Timbres consist of up to 12 Partial Timbres

Much of the magic of the original Synclavier owed to the ability to build Timbres (presets) by creating and layering four completely different sounds or Partial Timbres to realize massive, complex sounds.

With the Synclavier V, Arturia has upped the number of Partial Timbres to 12, dramatically expanding the creative possibilities. Since each Partial Timbre is a complete sound, that means that you can stack many different sonic elements into electrifying Timbres resounding with rich complex textures brimming with subtleties.

Each of the 12 Partial Timbres has two digital oscillators that combine the principles of both additive and frequency modulation (FM) synthesis. Rather than using filters to subtract harmonics from simple oscillators, additive synthesis builds up complex sounds by selectively adding harmonics in this case.

The Synclavier V goes way beyond that, combining these oscillators in an FM architecture where the carrier (main) oscillator is modulated by the second harmonic oscillator. The fusion of additive and FM technologies make for a diverse and unique universe of cinematic pads, epic leads, evolving bass lines and more.

Time Slices allow you to specify up to 50 snapshots of the 12 Partial Timbres of additive and FM synthesis goodness, and animate through them over time.

For each Time Slice, you can set the volume, pitch, FM modulation amount, and delay.

The ability to set parameter crossfades of up to 30 seconds between Time Slices—over a total time of 5 minutes—makes it possible to create long evolving ambient pads and cinematic cues of incredible complexity.

Where the original modulation oscillator was only a sine wave, now you can also choose sawtooth, square, or triangle—or graphically build your own waves comprised of 24 phase-controllable harmonics. These enhancements allow you to create outrageous textures never possible before.

Each Time Slice can now even have a separate FM modulator waveform. Variable bit depth between 4- and 24-bits, on-board effects, and a MIDI Learn feature are just some of the new options available in Synclavier V.

Synclavier V is available now for US $199 or as part of V Collection 5. A demo version is also available.