At the 2016 Summer NAMM Show, Aphex Twin (Richard D. James) had a booth, to introduce his new Cheetah EP and to display his rare Cheetah MS800 synthesizer.

We talked with Hannah from Warp Records, who gave us a quick booth tour.

The design and promotion for the Cheetah EP is inspired by the Cheetah MS800, a rare British synth that Richard D. James used in creating the EP, and the Cheetah Sweet Talker, below – a speech synthesizer for the Synclair ZX Spectrum computer. 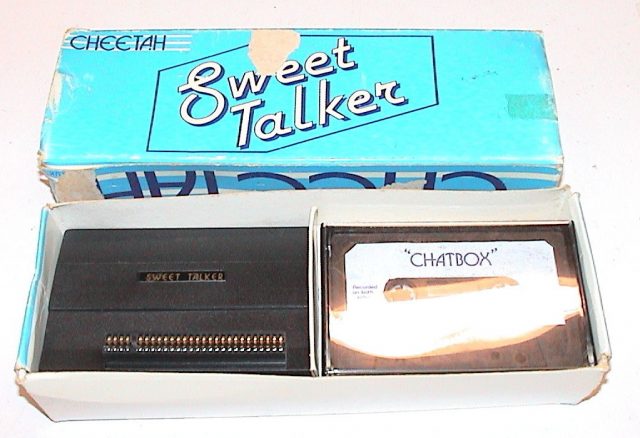 The Cheetah MS800 has a reputation for being impenetrable to use. Here’s what virtual instrument maker GForce Software has to say about it:

In the early 1990’s after a good degree of success, Cheetah released one of the quirkiest digital synths ever produced, their MS800.

This affordable Digital Wave Sequencing Synthesiser had an interesting spec sheet and sound, in addition to the honour of being one of the most unfathomable instruments ever made – it was mind numbingly confusing to program, not just in terms of setting up a sound but even something as simple as changing a MIDI channel on the MS800 could cause an aneurism.

Here’s a preview of the new EP, CIRKLON3:

The Cheetah EP is available on iTunes and Bleep, and details are available at the Warp site.

19 thoughts on “Aphex Twin Had A Booth At The Summer NAMM Trade Show And, Yeah, It was A Little Strange”