Developer Matthias Demoucron let us know about FingerFiddle, a new virtual string instrument that’s designed to let you play with the same level of control and expressivity as with a violin.

The video preview, above, features FingerFiddle being used to play the Sarabande from Bach’s Cello Suite #1.

“Being an experienced violinist, I wanted to play with a virtual instrument that I could use anywhere, and with which I could express myself like on a violin,” says Demoucron. “There was no such thing on the market, so I had to create it.”

The result introduces an expressive new instrument for mobile devices. The movement of the finger on the screen is used to virtually ‘rub’ the strings and shape the sound continuously, just like with a real instrument. Each action on the screen is turned naturally into a realistic and responsive violin sound. 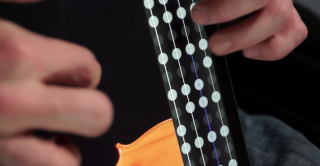 FingerFiddle uses a physical model to achieve its sound quality and reactivity. There are no pre-recorded sounds or samples: the sound is calculated in real-time by simulating the mechanical reaction of the strings to the movement of the user’s finger on the screen

“Violin is quite a fascinating instrument for most of us,” says Demoucron, “and many people would have loved to play violin or cello. This app let us experience the beautifulness of playing violin, but also its complexity.”

The developer says that FingerFiddle can be valuable to anyone interested in music playing, from beginners to advanced players and music producers.

FingerFiddle comes with a virtual cello. A full collection of virtual instruments from the violin family (including violin, viola and double bass) is available via In-App purchases.

The app supports Inter-App Audio and a wide range of possible customizations. On iPhone 6s and iPhone 6s Plus, the app also supports 3D Touch, for enhanced control of the sound and vibrato.

FingerFiddle is available for US $2.99 on the App Store and comes with a cello. Other instruments are available for $4.99 each $11.99 for a collection of four instruments.
It is compatible with iPhone 4s and later, and iPad 2 and later.