Note that using the LinnStrument with the Parva allows Bevin to move each note that he plays, independently of the others.

Bevin is a long-time advocate for expressive control of synthesizers. He’s the Principle Software Engineer on the Roger Linn Design LinnStrument and also the author of the Multidimensional Polyphonic Expression specification.

The Parva is a digitally-controlled analog synth module that’s both polyphonic and multi-timbral, which makes it a great candidate for playing expressively. And the latest Parva firmware patch unleashes some of this potential. 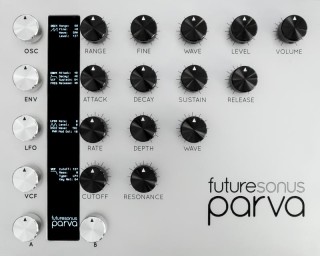 Here’s what Bevin has to say about the video:

As a Kickstarter backer, I’ve had the Parva for several months, but there were a few problems with the firmware that prevented me from fully using it. Today, Brad from Futuresonus released firmware update v0.51, fixing everything that was important to me.

So here is a demo video with LinnStrument.

I’ve set it up so that the x-axis controls per-note pitch and the y-axis per-note filter cutoff, I’m not using the z-axis.

The LinnStrument is connected directly to the Parva’s USB MIDI host port, which also provides power. The audio is recorded through my Metric Halo ULN-8 audio interface without any sound processing besides normalisation.

The Parva has eight independent analog voices that can be configured in a multi with a dedicated MIDI channel for each voice. Each voice can play a different preset, but I’m using the same preset for all voices here to allow for per-note expression.

In this multi, each MIDI channel is also sent to two voices, creating a unison sound, while still having full control over 4 independent notes.

I think it sounds pretty great!

The Futuresonus Parva is available for to pre-order for US $999. The LinnStrument is available via Roger Linn Designer and their retailers for a street price of about  US $1,500.