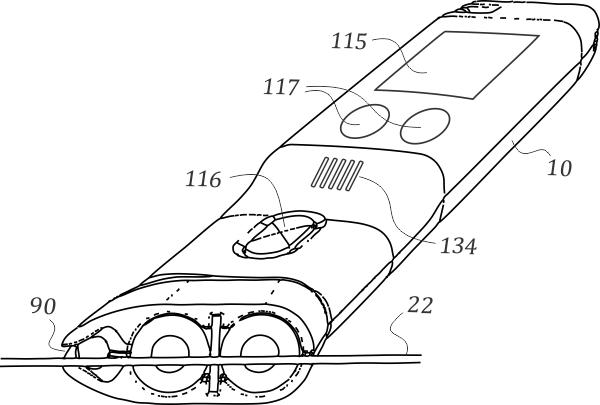 Paul Vo has officially launched a project to fund production of the Wond II, the next generation of his hand-held device for exploring ‘acoustic synthesis’.

Vo’s instrument designs, including the Moog Guitar and the Vo-96 Acoustic Synthesizer, explore the idea of using electronics to control the vibration of physical objects and to directly shape the harmonics of the resulting sound.

Vo introduced the original Wond at the 2015 NAMM Show:

Here’s what VO has to say about the Wond II:

During 2016 I developed a new core technology of acoustic synthesis. Significant improvements and amazing new features are now possible.

For example, microphone 134 (see drawinga above) will record a sound – any pitched sound. Imagine this: You press a button and record a sample of your own voice. The Wond II will drive the string’s harmonics to follow your recorded sample. It’s making your string act like an acoustic vocoder. And as you work the Wond closer to your pickups, you hear a re-synthesized sample note in unison with your electric guitar tone.

This one feature turns the Wond II into a hand-held monophonic synthesizer / string-vocoder that perfectly tracks whichever string you apply it to.

Display 115 and selection buttons 117 will let you select from and manage these recordings. We’ll store several at once in the Wond II. We can all review the options for bidirectional data interconnection.

Wireless and USB are two possible choices. What do you think? As a supporter your feedback will help guide such decisions.

The first Wond introduced tactile feedback of string proximity. This is a powerful idea that was not fully realized in the first Wond design. It’s there, but only “sort of”.

The goal with tactile feedback is to create the illusion of feeling the Wond’s magnetic field touching the string as you play. It can be something like way your guitar pick feels to your fingers as you pluck a string. To achieve this illusion convincingly the Wond II’s tactile feedback must be shaped by a far more advanced behavioral algorithm than I was able to squeeze out of the analog circuitry in the first Wond. This is why the Wond II will include a digital subsystem for advanced algorithmic control of tactile feedback.

The Wond II is still under development. Project backers can pre-order the device for US $170, with production expected to take about a year. See Vo’s site for details.