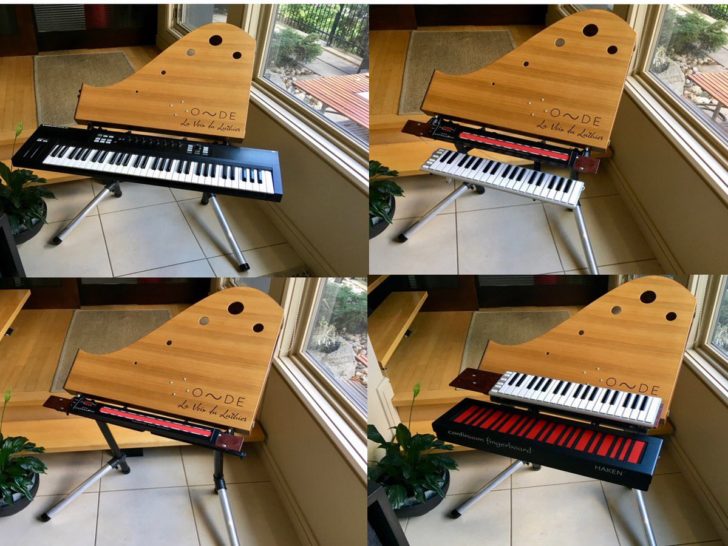 The Onde & Pyramid are not designed like most speakers.

We asked creator Christophe Duquesne to tell us more about the unique speakers and why they offer electronic musicians an alternative to standard monitors.

Synthtopia: For those that aren’t familiar with them, can you give us a quick ‘elevator pitch’ description of the acoustic resonators?

Christophe Duquesne: The main idea behind these acoustic resonators is really to bridge electronic and acoustic world.

I have been working on physical modeling, together with Haken Audio, for years and also on expression, mostly with the Continuum. But we were always ending in the electronic sound of a speaker.

With the resonators, now we can really get the wood sound of a real acoustic instrument for any electric instrument. There are no speakers in the resonator; the electric signal is transmitted to the soundboard in the same way the bridge transmits the vibration of the strings on a guitar or a violin.

Synthtopia: Where did the idea for the acoustic resonators come from? And what inspiration did you take from Maurice Martenot’s work?

Christophe Duquesne: I started music as a piano player. My mum was a piano teacher. I also play a bit of drums, duduk and other acoustic instruments.

I do love electronic instruments, obviously, but for years, I’ve been missing the feeling of the vibration of the instrument. And feeling the vibration is very important for expression, to keep the musician in the feedback loop.

I was also kind of tired with directive speakers, meaning that there are only a few places where you really get the sound that you want. For example, in a studio, you always have to seat at “the right place” in the head of the triangle designed by the speakers.

I was also jealous of my brother, who is a guitarist, and who can go to his stringed instrument maker to get the guitar he wants with the sound he wants: he can then really get his own personal instrument.

And you are fully right, this looks like a French obsession, started in 1928 by Maurice Martenot, especially with the Palm and the Metallic resonator.

Did you notice that this (the Ondes Martenot ) is one of the only electronic instruments being often used in an acoustic orchestra?

For some reason, which I don’t really understand, this direction of work was mostly interrupted – with some rare exceptions, like the Eowave Metallik Resonator.

So, you can see us as trying to take over the amazing work of Maurice Martenot – the Onde name is a clear tribute – but creating a new type of resonator. It is not a recreation of one of Martenot’s resonators, but an investigation into new possibilities in the direction originated by Martenot.

Synthtopia: Many electronic musicians don’t have any context for understanding the resonators. We’ve learned the idea that monitors should be flat and accurate, and the resonators seem to go in a completely different direction.

How do the resonators differ from standard speakers, and why do you think musicians should try something completely different?

Christophe Duquesne: The idea that monitors should be flat and accurate is because when you are a music listener, you want to have as few changes as possible to the original sound.

But, if you are a musician, you want to shape your sound, especially for electronic music. When you are doing this, flat and accurate is not any more relevant, but nice and immersive is.

Onde and the Pyramid are not sonically neutral – they offer a colored sound, carefully tuned by the luthier.

They are also omnidirectional as any acoustic instrument. The sound they produce is very immersive and they are “more than stereo”. They naturally spatialize the sound.

We have tried them in large venues and if you play in the center of the stage, as you would with a violin, you can hear them clearly everywhere. They are fully using the quality of the sound of the place they are played in.

I also love their transients, which are quite different, and more accurate to me, than traditional speakers. One typical example is when you have some mechanical or scratching component in your sound, they sound like “being here”!

Another important thing is that the Onde is designed to be easily physically connected to your instrument. Then you can feel the vibrations in your fingers. I just love this!

You can also tune your sound, since there are 2 soundboards with separate volume, and the sound is slightly different from low to high volume.

Synthtopia: We first became aware of you and your work through some of your software projects, so we were surprised to see you tackling this complex hardware project.

Can you tell us a little about your background, and how you see your software work connecting with a project like this?

Christophe Duquesne: I’m trained as an electronic and software engineer, but also started music – classical piano – at 6 years old, trained by my mother.

My father is also electronician and he was bringing components home…. So, as a result, from 16, I started soldering and coding devices intended to do music.

Also being an electronic music lover, I always missed the sound and the feeling of acoustic instruments. So, I jumped into physical modelling, and met Lippold Haken and Edmund Eagan. These guys are amazing, as both friends and as instrument makers. I still don’t understand how and why they accepted my contribution to Haken Audio.

This was a huge step for me.

But, I was still unhappy with the sound of speakers. And, then I met Marc Lucas, an amazing stringed instrument maker, and he was looking for a way to add electronics in his acoustic instruments. So the connection was obvious!

Synthtopia: You’ve put together a really interesting team for this project. Can you tell us a little about your collaborators and their role with the project?

Christophe Duquesne: Marc, Lippold and Ed are key in the project, as I mentioned previously.

Eric Mouquet, from Deep Forest, is also very important. When we did the first prototype, in July 2017, one of the first things I did was to demo it to Eric. I had the feeling we had something great, but being so deeply involved, you can’t really be impartial.

He loved it, and gave some ideas and directions to improve the experience for musicians.

The day I did the demo to Eric, Luc Bourachot, one of the top electronic audio engineers in France, who is repairing and maintaining a lot of Eric’s synthesizers, was there. And he is now in charge of the design of the amazing pure Class A amplifier of the Pyramid!

And François Astier, also known as NaniSound, is a very long time friend. We have been playing together in our band Anckorage for nearly 30 years now. I can’t imagine having a musical project without François being involved, and he is doing amazing work on the communication side.

Synthtopia: You shared a few photos with us of some of your early design prototypes for the resonators.

How did they evolve from the prototypes to their final designs, and what shaped your decisions in how the designs evolved?

Christophe Duquesne: At first, as a typical electronician, I thought Marc could design a kind of generic resonator, and that I would use a filter and processing technique to tune the sound. And I was 100% wrong.

Wood has its own behavior, and filters never have the result you are expecting. If the wood wants to resonate at certain frequencies, it will, whatever processing you do. And, if it does not want to ring a frequency, it won’t.

So we went the other way: truly neutral electronics – with emphasis on respecting transients and rise time – and all the sound work is now done on the wood.

But you can’t pre-calculate the behavior of an acoustic body – it’s much too complicated. So that is based on the expertise of the luthier, and on a lot of experiments, with types of wood, shape, size, thickness, braces types and density, internal volume, etc., and lot of tries and fails – and some success, and then tuning.

One important decision we made is to rely on our ears much more than on measurements. We wanted a nice sound, more than a “perfect” one.  And we now have the Onde and the Pyramid!

Synthtopia: From the audio demos that I’ve heard, I’ve been especially intrigued by performances that you and Edmund Eagan have done, playing the Continuum through the resonators.

It seems like there’s a lot of potential for combining physically-modeled sounds with the resonators, creating these very expressive sounds that seem sort of like an acoustic instrument that you’ve never heard before.

What do you see as the interesting territory for musicians to explore with the resonators?

Christophe Duquesne: Yes, physical modeling is obviously working really great for the resonators, since they were partly tuned for it.

However, it works really well with a lot of other types of instruments. For example, we did some tries with a Fairlight, one which is said to be the initial one of Kate Bush. The result was truly amazing!

In fact, since there is nothing similar to these resonators, it’s hard to guess what are going to be the best uses. It appears to be also great for guitars and an amazing complement to a traditional audio system, and that was not at all the intention, at the beginning.

So I’m quite eager to see what musicians will do with them.

One unanimous feedback we have is that you have to explore with these resonators as part of your instrument, not as a speaker.

Synthtopia: You’ve got several weeks still to go with your Kickstarter project. Once it’s done – what happens next?

Christophe Duquesne: The Kickstarter is going to help us to build our production chain. It is not going to an automated process, but an assisted manual process. But we need to build specific tools in order to lower the current production time from several days to about half a day. That’s mandatory to keep the resonator affordable. So, once done, we will immediately start building the production tools.

We will also launch all the supply of provisions. We have already done it for the wood – it takes time to dry, and after the Kickstarter is too late!

Do you realize that I bought some carefully selected tree trunks? That’s quite unusual for an electronic/software engineer! 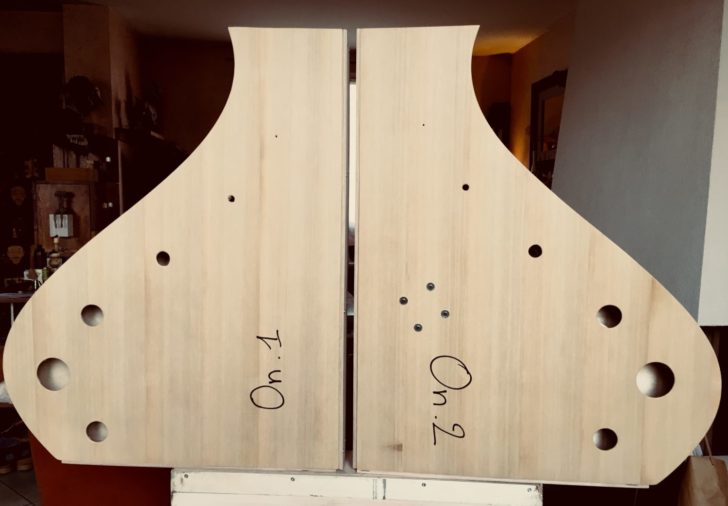 Synthtopia: Christophe, thanks for taking the time to tell us about your project!

Christophe Duquesne: And huge thanks to Synthtopia.

Did you know that you are also partly responsible for my discovery of Haken Audio? I first saw the Continuum on Synthtopia. That was the beginning of a long story, and you see where we are now! You sent small seeds in the air, and some have grown quite well.