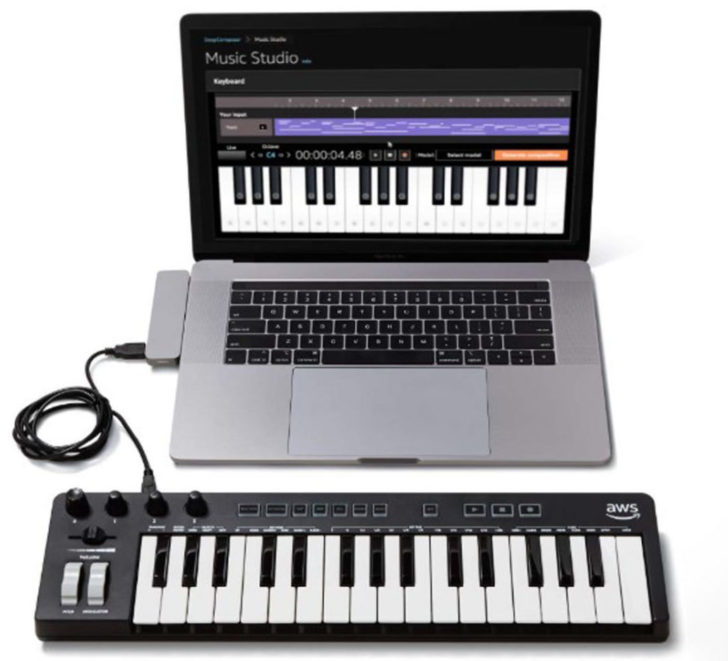 While machine learning/artificial intelligence has already been used in the development of electronic instruments like the Mutable Instruments Grids drum sequencer and Roland’s new Jupiter-X keyboards, DeepComposer is designed to open the door to broader application of machine learning to music composition and performance.

While DeepComposer looks like a standard MIDI controller – it’s part of a hybrid desktop + cloud platform designed to jumpstart development of artificial intelligence-based music making. AWS DeepComposer includes tutorials, sample code, and training data that can be used to get started building generative models, without having to write any code.

Generative AI is one of the biggest recent advancements in artificial intelligence technology because of its ability to create something new. It opens the door to an entire world of possibilities for human and computer creativity, with practical applications emerging across industries, from turning sketches into images for accelerated product development, to improving computer-aided design of complex objects.

Until now, developers interested in growing skills in this area haven’t had an easy way to get started. Developers, regardless of their background in ML or music, can get started with Generative Adversarial Networks (GANs). This Generative AI technique pits two different neural networks against each other to produce new and original digital works based on sample inputs. With AWS DeepComposer, you can train and optimize GAN models to create original music.

AWS DeepComposer is coming soon for $99 USD. Details are available at the Amazon site.

Art is in what you leave out.