Synthplex organizers Michael Learmouth and Michael Lehmann Boddicker have announced that electronic music pioneer Jean-Michel Jarre will give a keynote address at the four-day synth-centric event. Jarre will also be the recipient of the 2020 Golden Ear Award at the Synthplex banquet.

Here’s what they have to say about prolific composer, producer and performer Jean-Michel Jarre:

Jean-Michel is a composer, performer, producer, visionary, innovator, and cultural ambassador. Any list of his countless achievements would inevitably come short of his actual significance in music history.

Jarre, dubbed the “Godfather of Electronic Music,” has been at the forefront of electronic music since the release of his groundbreaking, debut album “OXYGENE” in 1976.

His visionary creative output is perpetually linked to his innovative exploration of new technological trends. From the first modular and polyphone synth and drum-machines to digital keyboards, plug-ins and apps, Jarre is always one the first to use them. He was the first person to release an entire album in 5.1. Sound and the first artist to use 3D audio technology for music.

Throughout his career, he has changed the world’s perception of musical performance, and he is a three-time Guinness World Record holder for largest outdoor concerts of all time. In 1986, he used the Houston skyline as a projection surface for the first-ever large-scale laser-mapping performance. In 1997, he set up a live video connection to the MIR astronauts in space during his epic Moscow spectacle, playing to a monumental 3.5 million spectators.

His millennium concert in Egypt was the first concert ever to be streamed live on the internet. In 1981, he was the first live, Western, musical act in post-Mao China. He also played a welcoming party to the Pope in Lyon, performed in Beijing’s Forbidden City, and played a concert the Sahara Desert. 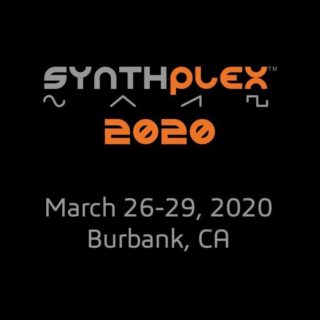 Synthplex 2020 is scheduled for March 26 – 29 at the LA Burbank Airport Convention Center.

The event begins the evening of Thursday March 26 with live music in tribute to the late Keith Emerson.

For a full list of exhibitors, as well as speakers, performing artists, and a more detailed schedule of the event, visit the Synthplex site. Tickets to Synthplex 2020 are $49 for a one-day pass, and the full four-day event pass* is $99.

Note: You can get 20% off four-day passes by using the promotional code SYNTHTOPIA20