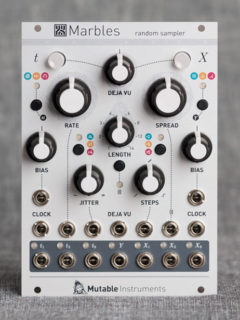 Mutable Instruments has released a firmware update for its Marbles Eurorack module, adding a new ‘Super Lock‘ feature and more.

Marbles is a source of random gates and voltages that offers an extensive amount of control of the randomness it produces. The module is designed to give you many different ways of using randomness in musical ways.

The update is available now as a free download from the Mutable Instruments site.